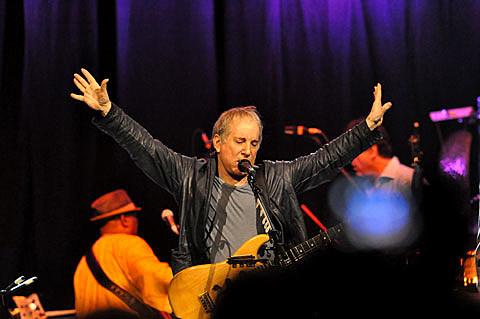 City Winery founder Michael Dorf has announced this year's tribute show at Carnegie Hall to benefit NYC music education programs. (Last year was Prince, and he's done The Who, R.E.M., and others in previous years.) 2014's will be a tribute to Paul Simon on March 31 and the New York Times reports that Bob Mould, Ben Sollee, The Civil Wars' Joy Williams, Bettye LaVette, Dan Wilson,, composer Allen Toussaint and Madeleine Peyroux & Jon Herington, will be among the performers. Tickets are on sale now.

Paul Simon may or may not show up for his own tribute but you can definitely see him in NYC early that same month when his tour with Sting  hits Madison Square Garden for two shows. The March 4 show is sold out but you can still get tickets for the March 6 date.

Bettye LaVette also plays NYC much sooner at Highline Ballroom on Sunday (1/12) with Stanley Clarke Trio and The Harlem String Quartet. Tickets for that show are still available.

And as discussed, Allen Toussaint also teams with Blind Boys of Alabama for a NYC show this week at BB King's on Friday (1/10) (tickets).