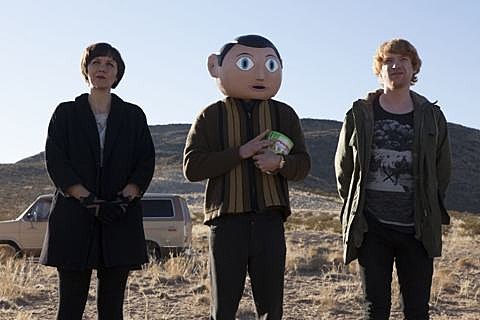 There aren't a lot of actors out there where I'll go to see a film just because they're in it but Michael Fassbender is one of them. From more commercial projects like X-Men: First Class and Prometheus to his work with director Steve McQueen (Hunger, Shame), he always gives interesting performances, even in films that aren't very good (Jonah Hex). Fassbender is currently filming Frank, what could be the strangest film of his career, playing late UK cult icon Frank Sidebottom (!).

As you may know, Frank Sidebottom alter ego Chris Sievey (who was also in Manchester punk band The Freshies) died suddenly in 2010 after a short battle with cancer. Sidebottom's music, usually covers of popular (and indie) songs rewritten to be about Frank's life in Manchester suburb of Timperley, often with help from a puppet version of himself called Little Frank. All while wearing a giant paper mache head. Frank played NYC often in the last ten years of his career and seeing him confuse day drinkers at the 119 Bar back in 2008 is one of my fondest show memories of the last five years.

The film Frank, is only loosely based on his life. The IMDB synopsis:

A comedy about a young wannabe musician, Jon (Domhnall Gleeson), who discovers he's bitten off more than he can chew when he joins an eccentric pop band led by the mysterious and enigmatic Frank (Michael Fassbender).

The film also stars Maggie Gyllenhaal and, yes, that's a still from the movie above. As it's still filming, Frank probably won't see release till late 2013 if we're lucky. Till then, a few Frank Sidebottom videos are below.