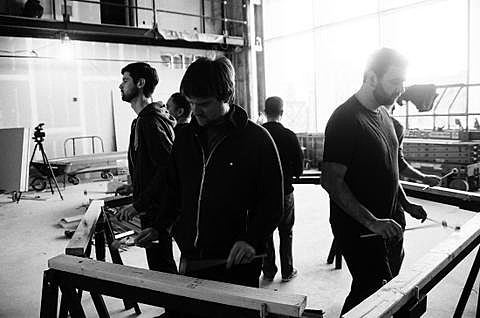 Part of BAM's Next Wave Festival, Bang on a Can co-founder Michael Gordon's Timber makes its New York premiere this weekend, running tonight through Saturday (12/13 - 12/15) at the Fishman Space. As the title suggests, there's a lot of wood involved in this percussive piece:

Timber is scored for six amplified wooden 2x4s, cut into different sizes, giving each one a slightly different pitch. Called "simantras", these percussion instruments, with origins in the Eastern Orthodox Church, were first used in classical music by composer Iannis Xenakis. Far from a gimmick, the custom instrumentation allows Gordon to create the impression that the sound is traveling around and through the room by subtly shifting the accent of sound from one player to another. The result is a meditation on sound and rhythm, bringing the physicality, endurance and technique of percussion performance to a new level.

Mantra Percussion ensemble will be bringing Timber to life at the Next Wave fest performances and you can watch video of them in action below. Performances are at 7:30 PM and tickets are still available.

The Timber CD was released last year (in a wooden box, of course), and next year will see the release of a remix album, featuring remodels by the likes of Antipop Consortium, Oneohtrix Point Never, Johann Johannson, Fennesz and Deerhoof drummer Greg Saunier whose version we have the premiere of in this very post. You can download it above or stream it below, along with the Timber video.