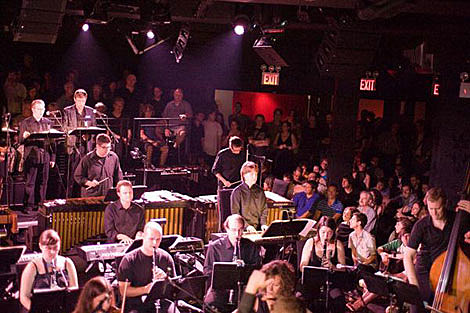 New York composer and Bang on a Can co-founder/artistic director Michael Gordon will bring his 1994 piece Trance to NYC for the first time in more than ten years on Wednesday, April 22nd at (Le) Poisson Rouge. Tickets are still on sale.

Signal, who performed at last year's Bang on a Can Marathon and showcased Steve Reich's Music for 18 Musicians at LPR in September (among other gigs), will play as a 22-piece ensemble for the performance. It will be the first time Trance has been performed by a group other than UK ensemble Icebreaker, who Gordon wrote the piece for and who has been performing the work regularly abroad.

[Gordon's] best works are characterized by insistently repeating rhythms and melodies and, in some cases, instrumentation that mixes rock and classical colorations. "Trance" (1994), an extended elaboration on a simple electric-bass riff, has become a post-Minimalist classic. [NY Times]

If you miss it, Signal will visit the piece again during the free, 12-hour Bang on a Can Marathon on May 31st at World Financial Center.

An MP3 of Part Two of the six part work (which was split into 7 MP3's), performed by Icebreaker, is posted above. The other five parts are, or will be, posted as free downloads on other websites this week. We're not allowed to tell you where they are though, but we can give clues and say that you won't find them at any of the usual suspects. The MP3's are scattered mostly across classical music-related sites. Find them all, and, in addition to having them all, you'll have the chance to win tickets to Trance at LPR. More details below.

And speaking of the Bang on a Can Marathon, we now have an even more-updated version of the lineup. Check it out below.

Nico Muhly's (hint) take on Michael Gordon, more upcoming Signal dates, and everything mentioned above, below...

Details on the pre-show discussion @ LPR on April 22nd

Michael Gordon's huge and hugely wonderful, 50+ minute riff- and throb-fest Trance, composed in 1995, is being dusted off for what promises to be a memorable performance by the ensemble Signal, 7:30pm April 22nd at Le Poisson Rouge.

The fun and games begin at 6:30 pre-concert in the bar, however; Gordon himself, along with Ronen Givony (from Wordless Music and Le Poisson), Signal director Brad Lubman, bandmate/composer Ken Thomson (who also does duty in Gutbucket) and others, will talk about producing and performing new works with emphasis on the whys and whats of a piece after their first presentation. Trance was premiered at Bang on a Can in 1997, and hasn't been played in New York since. [Sequenzia 21]

Cantalope Records, who re-released Trance on CD in 2004, is running a ticket contest for the piece's April 22nd performance. Before the show, seven blogs will post pieces of the six-part work (the last piece is split in two). "The first three people to respond with the list of all seven blogs get a pair of tickets to the LPR concert. To submit the list, people should e-mail promotion (at) firstchairpromo (dot) com." (Note: BV is not running this contest, so any problems are out of our hands --there are some clues of where to look in this post however.)

I went to the Bang on a Can Marathon for a few hours. I love the feeling in that space, not particularly the acoustics, but the relaxed, everybody piled onto the steps of the Wintergarden, listening to music, not listening to music, eating nachos, whatever. I am engaging in a new social experiment with all Bang on a Can Events. I have this theory that they, as an institution, know from awesome but to not know from fabulous. I use both terms in their King James Bible sense: the music they present is powerful, muscly, athletic. The music is not otherworldly, mysterious, mystical; its primary gesture is the rut, the frot, the iron fist of socialized thought. It does not concern itself with the insinuation, the unfinished seam, the pining.

That having been said, I was particularly struck by Michael Gordon's piece, "Every Stop on the F Train," which, as promised, is a list of all the stops on the F-train repeated in order, repeated and chanted, in canons at the 8th note. All of this was deftly executed by the Young People's Chorus of New York, but while I was listening to it, I thought to myself: my God, it is entirely possible that Michael Gordon is operating outside of the influence of Britten's A Ceremony of Carols! I had two sudden thoughts which are: my music, which has very many surface stylistic similarities to the Bang on a Crowd, has a completely different emotional genetic makeup. I would never write music in a canon at the 8th note without fully reverencing Britten; it would feel like serving pâté in my grandmother's rabbit-shaped terrine without thinking about her.

My second thought was, maybe that's why I always feel so other at these BOAC things; I'm meant to feel part of the community, which is technically true, but my itinerary is completely different; we are in different parts of the airport, heading to different continents -- friends only in the transfers lounge. To a certain extent, their community is one that de facto couldn't include somebody with my history, tropisms, or musico-erotic itineraries; theirs is rugged, weather-beaten, and Old Testament-seismic, whereas to them, I probably read as effete, ornamental, and most likely more suited for work in the kitchen or nursery than in the fields. I used to feel this acutely as a sort of rejection; now I think I've come to terms with it through, strangely, a series of sartorial decisions.

My final thought was that maybe Michael Gordon needs some animal therapy; Autistic children are often softened by their relationship with animals; I wonder if I can secretly bridge the gap by always turning up at these BOAC events wearing only the softest fabric and the most unfinished seam? With this in mind, I dressed myself in a satiny pant, and what basically amounted to a white kurta pyjama (albeit a belgian kurta pyjama) on top. We'll see what happens if I keep this up for a few years! [Nico Muhly]

Bang on a Can Marathon line-up update

Bang on a Can's annual incomparable eclectic super-mix of genre defying music! On Sunday, May 31, a swarm of musicians and composers from all over the world will descend on the Winter Garden in New York City for 12 HOURS of uninterrupted live ear-bending border-crossing music from around the corner and around the globe.

Among the many highlights, this year's marathon will feature: