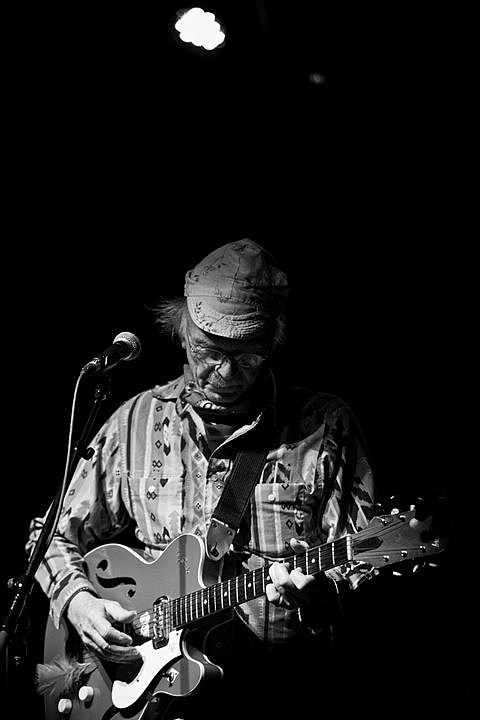 Having spent time in the '60 Greenwich Village scene with his work covered by Holy Modal Rounders (who he also collaborated with) and others, acclaimed folk songwriter and performer Michael Hurley has remained active and prolific into his 70s. Last year saw the release of documentary Elwood Snock & The Land of Lo-Fi which followed Hurley on tour:

Driving stretches of endless highway with Hurley in his 1973 Dodge wagon, the film visits fellow musicians and side-dwellers who, like Hurley, have chosen an alternate road. They speak not only to the consistency of his musical creations--off-kilter vocals and an arrhythmic beat --but also to his unfettered style of living. Through scenes that Hurley himself shot, the film quietly opens us up to the pulse of his life. Hurley abides by his inner song and has ensconced himself in creations of his own imagining; after forty years and over twenty albums, he has maintained a compelling musical universe insulated enough to hold its own center.

The film's accompanying soundtrack, Land of Lo-Fi, made a few 2013 Top 10 lists as well. The film is not on DVD or streaming, and no current screenings are listed, but you can stream a few tracks from the soundtrack below.

Michael Hurley is on the East Coast, playing a few shows including two shows at Brooklyn's Union Pool tonight (5/21 w/ Jess Williamson) and Thursday (5/22 w/ The Horse Eyed Men). While advance tickets are sold out, there will be a limited amount available at the door for each show.

Michael also plays Hudson, NY's The Half Moon on Friday (5/23) with Tara Jane O'Neil and Metal Mountains. Tickets are $10 at the door. All dates are listed, plus streams from Land of Lo-Fi, below...