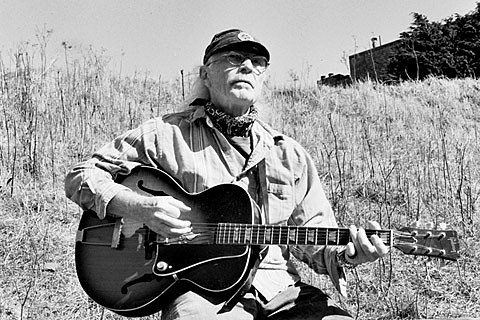 A singer/songwriter in the subversive Greenwich Village folk scene of the late '60s and '70s, with several songs lent to the Holy Modal Rounders, Michael Hurley maintained an infrequent solo career into the '90s but was more famed for his writing credits. Born on December 20, 1941 in Pennsylvania, he migrated to Greenwich Village by the early '60s and was ready to sign a major record deal when he contracted mononucleosis; after spending several years in the hospital, Hurley returned to music and released a Folkways album in 1964 titled First Songs. Though he was inactive through the rest of the '60s, [the self-titled LP of his 1976 project with Holy Modal Rounders leader Peter Stampfel, Have Moicy]... was critically praised, landing recommendations for Album of the Year by The Village Voice and Top 20 LPs of the '70s by Rolling Stone. Hurley's prominent place on the album -- guitar, fiddle, several lead vocals -- gave notice that he was ready to resume his solo career, and he signed to the folk label Rounder in 1977. Hurley released only two LPs for the label (Long Journey and Snockgrass), spending most of his time on his farm in Vermont or playing sideman on several albums. He resurfaced occasionally, recording LPs in 1984, 1988, 1995, and 1999.

Hurley continued to record in the 21st century. In fact, from the late '90s he was embraced by hip indie singer/songwriters such as Devendra Banhart and Chan Marshall, who were attracted to the singer's unconventional vocals and esoteric sensibility. -[allmusic]

Michael Hurley has remained active in the past few years, releasing material on Banhart's Gnomonsong imprint and dropping an album as recently as last year (2010's Blue Hills).

Hurley is knocking the door to his 70s, and though no retirement is in sight, you never know, so try and catch the influential folk singer either at Union Pool TONIGHT with Meg Baird (10/4) or at Zebulon on 10/6 with Rain Machine (aka Kyp Malone of TV On The Radio, who also play this week). The shows are part of a set of select East Coast dates that last through the weekend and are listed below.

If you do go tonight, look for both Deer Tick (who covered Hurley at DBA last night) and their friend Jonny Corndawg (who recently played Brooklyn Bowl with Hurley) in the audience.

Tour dates, a 2007 live video from Union Pool, and a documentary short on Hurley is below.