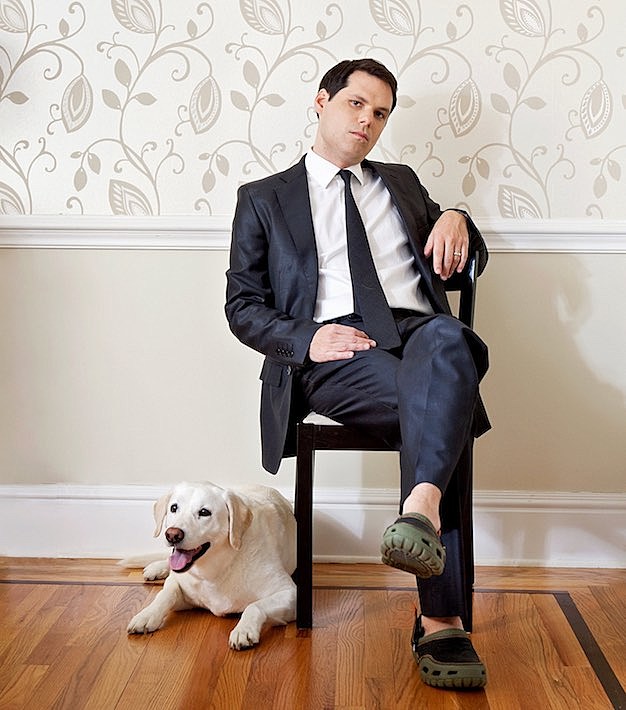 Comedian and actor Michael Ian Black (The State, Wet Hot American Summer) releases his new memoir, Navel Gazing, this week. It's actually his second memoir (You're Not Doing It Right came out in 2012), and is subtitled "True Tales of Bodies, Mostly Mine (but also my mom's, which I know sounds weird)." This time he looks at middle age and his attempts to fight it:

Once you hit forty, it is no longer possible to pretend you will remain forever young. In fact, according to the Social Security Administration, a man like me, aged forty-three, can only expect to live an additional thirty-eight years. In other words, I am past my life's midpoint; calling myself middle-aged is a disservice to the entire field of mathematics. Yet, I don't feel like my life is halfway over. I feel exactly as I did ten or fifteen years ago. But somehow whole decades have elapsed in the time I've spent upgrading my iPhones through their various iterations. Worlds have whirled around meEntire species have gone extinct as I drove around parking lots looking for a betterspaces. Then one day, I look up and and a government agency is informing me I am no longer a zesty young man, but a just-past-middle-aged adult with adult responsibilities and a mortgage and the first signs of erectile dysfunction. This moment eventually happens to all of us, the moment when you first sense that the road you are traveling may, at some point, have an end. And when that realization hits, it does so in the sudden, jarring manner of a car crash: "Oh, shit!" you may think at the moment of impact. "I'm going to die."

You can read a longer excerpt from Navel Gazing over at Black's website.

Michael will be promoting Navel Gazing with a few events in the NYC area this week. On Tuesday (1/5) he'll be at the Tribeca branch of Barnes & Noble (buy the book at the store to attend ); then he'll be at Jersey City's Word Bookstore on Wednesday (1/6) (pre-order the book for guaranteed admission); he'll also be talking about the book with Mo Rocca on Thursday (1/7) at Symphony Space (tickets); and finally he'll be at Brooklyn's BookCourt on Friday (1/8) at 7 PM (RSVP).