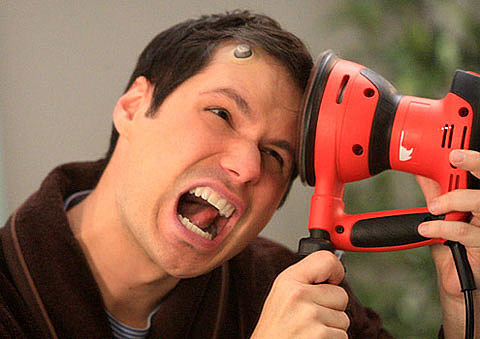 OK, rather than bore you to tears with one of my usual exhausting preambles about how great the NYC comedy scene is, I am simply going to throw out a handful of shows coming up that are well worth your attention. (Unless you're a humorless slob who has nothing better to do than hate everything.) For everyone else, what follows is some totally awesome news. You're welcome, in advance.

First off, as mentioned already, the great Louis CK will be doing two pretty last minute shows at The Bell House on Friday September 30th aka TODAY at 7:00pm and 9:00pm. The shows go onsale Friday September 30th aka TODAY at 10:00am, so get those refresh button fingers limbered up. After that, your next official opportunity to see Louis in NYC is on Thursday November 10th at the Beacon Theater as part of the New York Comedy Festival.

And speaking of comedy in Brooklyn, don't forget that tickets are on sale for Mike Birbiglia's show happening on Tuesday October 18th at Union Hall. Though, there's a good chance the show will be sold out by the time you read this. This is a CMJ show believe it or not.

But back to the Bell House for a second. On Thursday October 20th, the really and truly wonderful Julie Klausner brings her podcast How Was Your Week? to the Bell House stage with a truly incredible line-up that actually sort of reads like the guest list on a good night of The Best Show on WFMU. The line-up so far includes Ted Leo, Paul F. Tompkins, Billy Eichner, and Special Surprise Guests. And knowing Julie, those surprises are bound to be way beyond worth the cost of admission. And speaking of the cost of admission, I am truly dumfounded that this show isn't sold out yet. Oh, but you know what is sold out? The TWO Paul F. Tompkins shows happening at The Bell House on October 22nd and October 23rd. You know what's nuts about those PFT shows? He won't be doing the same material both nights. Holy!

On Tuesday November 1st, the House will play host to a John Hodgman "That Is All" Official Book Release Party. The cost of admission will get you a copy of the book as well as other treats, including Jonathan Coulton. Totally brunchcore.

Yikes! Lemme loop back to CMJ comedy shows taking place at Union Hall this year. I'd be an idiot (well, a bigger idiot than I already am) if I didn't mention that one of NYC's most awe-inspiring comedy/variety/brainz shows Heart of Darkness will bless Union Hall with its majesty on Saturday October 22nd. The show is hosted by Greg Barris and will feature Greg Johnson, Dave Hill, Mind Warrior Michael Wigler and a SPECIAL GUEST! For the uninitiated, it might make sense to learn about the show here. Best to go into these things prepared.

Oh, but before I go to bed, here's another show worth noting, but be warned, this one takes place in Manhattan. Comedic wunderkind Michael Ian Black will be doing a show at Bowery Ballroom on Thursday November 10th as part of the New York Comedy Festival. Bowery does seem like an odd venue choice for me because, well, it's too small for MIB and, well, ya don't often see comedy there. I am pretty sure the last comedy show I saw there was the Invite Them Up CD release party way back in 2005. But I ain't complainin. Bowery is one of my favorite rooms in the city, and I love MIB ever so much. Tickets are on sale, though I doubt for much longer. Shit gone sellout ASAP, son.