A few weeks ago I was at Don Hill's in Manhattan when I saw a seemingly expensive glossy poster on the wall for an August 30th show by a band called "La Dolce Vita". I thought it was weird - all the other local bands that play Don Hill's on a regular basis don't get posters like that. It was dark, I didn't look close, and then I forgot about it.

A few weeks later I just so happened to be looking at a copy of the Daily News someone left on the train. Inside was a picture of Christopher from the Sopranos holding a guitar. The caption read: "Michael Imperioli blew them off the stage at Don Hill's Wednesday night with his band, La Dolce Vita. The Sopranos star who plays guitar, sings in an arch punk style more like Richard Hell of the Voivods than his wiseguy character, Christopher Moltisanti." Then I knew.

There's a video from another show @ YouTube, and a picture I found of the poster-in-question is below.... 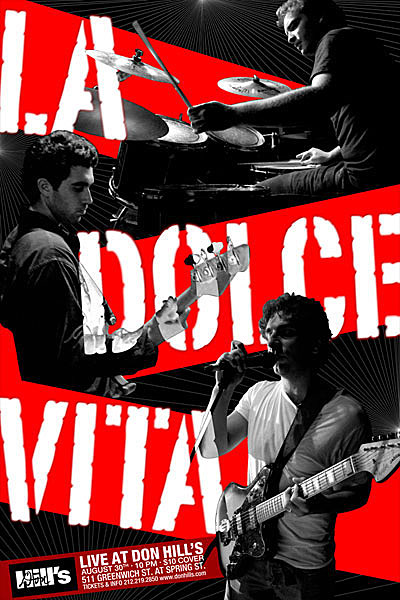 The quote in the title came from here.