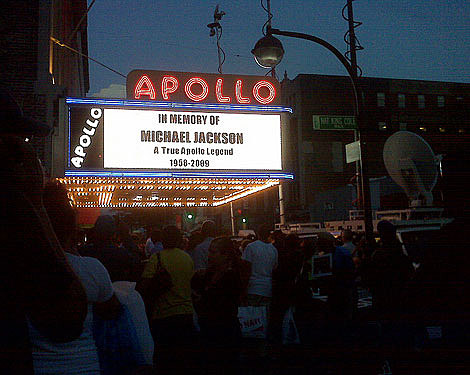 The Apollo Theater in Harlem posted the message, "In Memory of Michael Jackson, A True Apollo Legend" on its billboard Thursday after learning of Jackson's death at age 50.

In Times Square, a low groan went up in the crowd when television news flashed the news that Jackson had died. People began relaying the news to people by cell phone text messages.

Thirty-six-year-old Micheal Harris of New York City read from a message sent on his phone, "No joke. King of Pop is no more."

Harris said he will always remember being in Times Square when learning that Jackson had died.

The Rev. Al Sharpton issued a statement on the music legend's passing:

"A friend of Michael's for the last 35 years, I call on people around the world to pray for him and his family in the hour. I have known Michael since we were both teens, worked with him, marched for him, hosted him at our House of Justice headquarters in New York, and we joined together to eulogize our mutual idol, James Brown. I have known him at his high moments and his low moments and I know he would want us to pray for his family." [CBS]