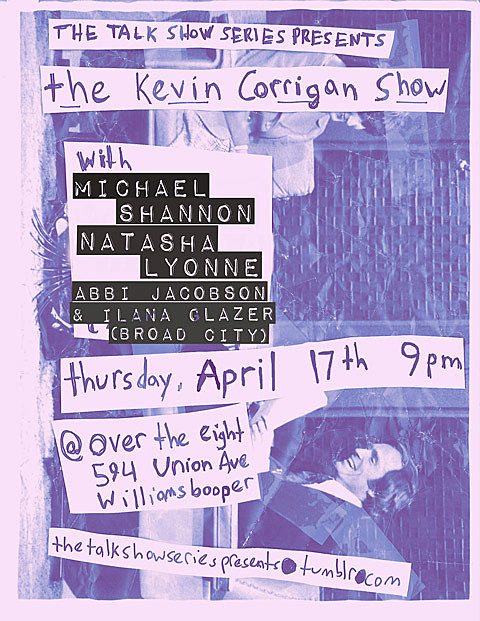 Holy smokes people. Several times now I have tried to hip you l'il pups to Brooklyn's new and completely dominating series called "The Talk Show Series Presents..." which takes place, sporadically, in the back room of Williamsburg bar Over the Eight. The series is a talk-show formatted live show featuring a revolving cast of hosts and guests. The past few episodes have been hosted by famous awesome actor Kevin Corrigan and he has delivered such an unbelievable roster of high-end talent to that teeny tiny little room that they now need an ambulance on-site during the shows because people lose control of their bowels and sometimes faint or even drop dead from excitement.

And now, the next, star-studded, holy-shit-gasp inducing Talk Show Series Presents: The Kevin Corrigan Show is upon us and sweet baby Jeebus it's a whopper! Thursday (April 17), Talk Show Series will feature Michael Shannon, Nathasha Lyonne, as well as Ilana Glazer and Abbi Jacobson from the wildly and justifiably popular and groundbreaking series Broad City. The show is at 9 PM on the dot, and the show is FREE. Get there early because the place only holds about 30 people; 27 if I attend because I am a lard ass and take up hella more space than most humans.

In other Michael Shannon related news, besides being a compelling powerful actor, he's also a musician who happens to be in a band. That band is called Corporal and they happen to have a gig coming up on Friday April 25 at 17 Frost Street Space in Williamsburg. 17 Frost is a tiny space nestled cozily next to a god awful shit looking condo building in Williamsburg. Blink and you'll miss it.

Thank you for taking the time to read my words.
*splash*