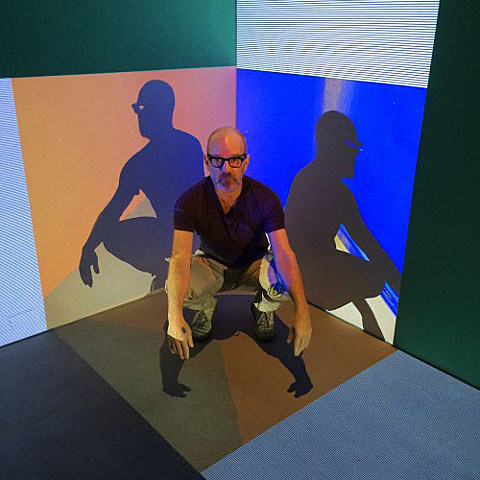 Former REM frontman Michael Stipe dropped out of the University of Georgia (he was an art major) when R.E.M. took off, but has been focusing once again on art since the band split in 2011. He's back at a different college, NYU, where he's an artist and teacher in residence, and is behind a new exhibition titled NEW SIGHTS, NEW NOISE which is running at 80 WSE Gallery (80 Washington Sq. East @ W4) now through November 8, 2014. Stipe has repurposed the space as a studio, classroom, and laboratory "that will exist in a constant state of flux for the duration of the exhibition." More on those three components:

Stipe will establish a fully functioning studio in 80WSE's front gallery, where he will work for the duration of the exhibition on a series of new projects, across a wide range of media, during the hours that the gallery is closed to the public. While the gallery is open, visitors will be able to see the state in which the studio has been left after each of Stipe's work sessions, making processes that are normally private public and offering a window into his remarkably prolific, varied, and non-hierarchical way of seeing, thinking and making.

In addition, the project will expand Stipe's perspective and approach into the format of an undergraduate studio art course, which he will teach in NYU's Department of Art and Art Professions. For each of the six weeks of the exhibition Stipe, collaboratively with a guest artist or cultural figure that he has invited, will pose a question or prompt to the class. In response, each student along with Stipe and the guest will generate 100 images and gifs, both found and made, all of which will be uploaded to a private class website.

Finally, the remaining four connected gallery spaces, which constitute 80WSE, will consist of 15 independent projections, in various configurations, the content of which will be sourced from the class's website. The selection of images and gifs - their composition and layout - as well as the way they are situated via the projectors in the exhibition, will be changed throughout each day by a rotating pre-scheduled series of curators, including Stipe, each of the special guests, and the 18 students in the class.