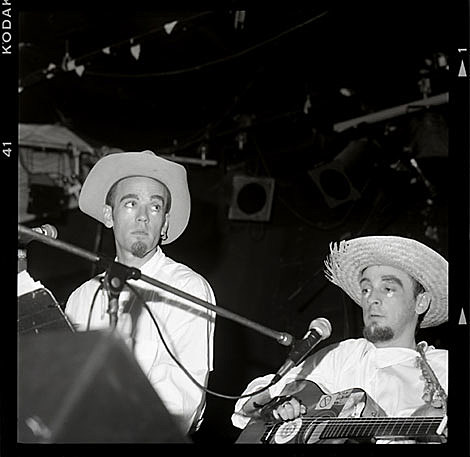 Vic Chesnutt (November 12, 1964 - December 25, 2009) was a singer-songwriter living in Athens, Georgia. He had been writing songs since he was five years old. Injured in a car accident in 1983, the paraplegic artist's first big breakthrough to commercial success came with the release of the tribute album Sweet Relief II: Gravity of the Situation.

Around 1985, Chesnutt moved to Athens and joined the band, The La-Di-Da's.[2] After leaving that group he began performing solo on a regular basis at the 40 Watt Club; it was there that he was spotted by Michael Stipe of R.E.M.; Stipe produced Chesnutt's first two albums, Little (1990) and West of Rome (1991). [Wikipedia]

Patti Smith, Jeff Mangum, and Kristin Hersh have also made public statements since it was confirmed that Vic Chesnutt passed away on Christmas day.

R.E.M. covered Vic's song "Sponge" for the above-mentioned Sweet Relief CD. Audio of that song, along with video of Vic and Elf Power covering "Everybody Hurts" at the REM tribute at Carnegie Hall, below...