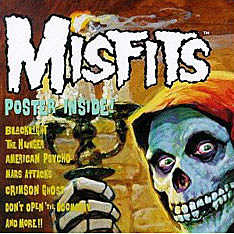 The "American Psycho" lineup of the resurrected MISFITS (minus Jerry Only) will be reuniting for a one-time performance at the Starland Ballroom in Sayerville, New Jersey on Saturday, December 26. Headlining the show will be DANZIG.

The reunited MISFITS will include vocalist Michale Graves, guitarist Doyle Wolfgang Von Frankenstein and drummer Dr. Chud. Bassist Jerry Only will not be participating, but Argyle Goolsby of BLITZKID/GORGEOUS FRANKENSTEIN fame will there to add the low end.

Vocalist Michale Graves has been busy touring with MARKY RAMONE'S BLITZKRIEG as well as supporting his recent live acoustic album, "Illusions Live/Viretta Park", which is available via Screaming Crow Records.

"This is more of the MISFITS then anyone has ever seen in almost 10 years," says Graves. "75 percent of the band reunited on stage in New Jersey opening for the man truly responsible for all this horror business?! I am confident that this will provide fans a real taste of what the MISFITS truly were and could have been!" [Blabbermouth]

I thought there might some kind of Misfits reunion at the show, but I didn't think it would be with Michael Graves singing... So like, just to clarify, here is a list of all the Misfits singers:

Jerry Only is the current singer of the "Misfits" aka the band you would be going to see if you ever bought tickets to a Misfits show in the present day. Jerry, and his drummer Robo (a member of the band from 1982-1983, and from 2005-present) will likely NOT be at the Starland show because they wouldn't really be welcome.

According to a report from Cleveland Scene, there were apparently plans underway for a proper reunion between the Misfits and their estranged singer-songwriter, Glenn Danzig. However, according to an interview with former Misfits guitarist Doyle Wolfgang Von Frankenstein:

We were actually going to do a Misfits reunion with Glenn. But Jerry put a fuckin' monkey wrench in it. [In] 2002, we had meetings ... And [Jerry] kind of fucked it up, him and his manager. We were going to do a record, do a tour and everything. So let all the Misfits fans put that in their pipe and smoke it.

Over the years since 2002, rumors have always emerged that Danzig would reunite with his former bandmates, but the singer always vigorously denied them. In fact, during the lead up to the singer's 2005 Blackest of the Black tour, Glenn noted: "It's the closest thing to a Misfits reunion anyone is ever going to see!" [PunkNews]

Glenn Danzig, aka the real and original singer of the Misfits, has been doing mini Misfits reunion sets with Doyle Wolfgang von Frankenstein (who happens to be Jerry's brother) since 2005 (as noted above). Doyle, who is now in Gorgeous Frankenstein with Dr Chud, was the Misfits bassist from 1980-1983 (with Glenn) and from 1995-2001 (with Michael Graves).

Glenn and Doyle do the special Misfits sets in addition to playing with their respective bands who would be on the same bill....such as during the 2005 Blackest of the Black tour... and much like lineup at Starland Ballroom tonight (12/26)... where I'm hoping they do it again in addition to the confirmed Michale Graves reunion which is weird - especially since they're sharing a bill with Glenn...

Maybe Glenn will play with Doyle in addition to the Michale Graves set? Maybe Glenn will come out and play with Michale, Dr. Chud (Misfits drummer from 1995-2000) and Doyle? Or maybe Doyle will just come out and play during Danzig's set? No matter what, it's going to be an interesting night and a family affair... Even the first band on the bill, Seventh Void, features a member of Danzig's band (Johnny Kelly who is also in Type O Negative).

A "Danzig vs Michale Graves" video, two versions of the show flyer and more info below... 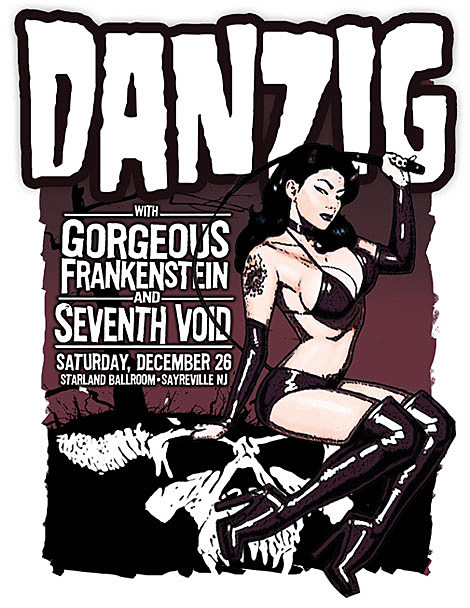 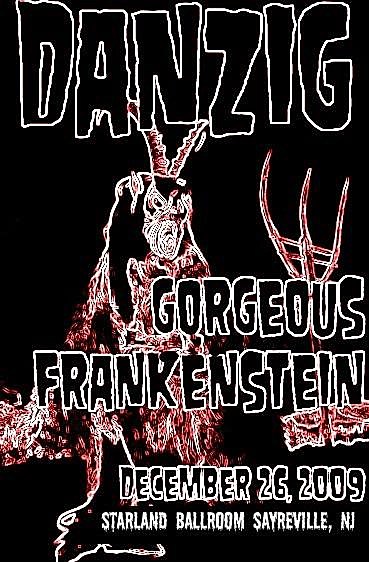