Liturgy at Webster Hall in February (more by Amanda Hatfield) 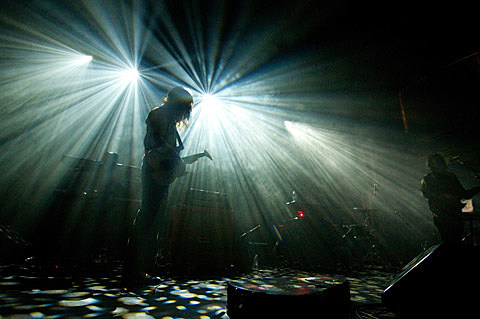 If you've noticed a handful of interesting shows at The Stone happening next week, like the acoustic Vaura show (4/20) or the Amen Dunes and Guardian Alien show (4/17), they're part of Chippy Fest, which goes down at John Zorn's non-profit venue from April 17-22, and was curated by John Zorn's exclusive designer Heung-Heung Chin (aka Chippy)

On April 21, the night after Vaura plays, Toby Driver (who is a member of Vaura and also fronts Kayo Dot/maudlin of the Well) will present the world premiere of his new trio, Ichneumonidae, which includes violinist Timba Harris (of Secret Cheifs 3) and Michelle Morinaga. That same night, Toby also plays as a member of Stern with Chuck Stern, Keith Abrams, and Tim Byrnes.

As mentioned, Kayo Dot, Vaura, and Dysrhythmia share a bill at DBA on 4/28.

Other 'Chippy Fest' shows include Mick Barr (of Krallice), Hunter Hunt-Hendrix (of Liturgy), and Nymph on Wednesday (4/18) and Miho Hatori (with Ahmed Gallab of Yeasayer), Timo Ellis, and Unstoppable Death Machines on Thursday (4/19). The Stone's full calendar is here.

Speaking of Hunter Hunt-Hendrix, he kicks off a residency at Issue Project Room on Saturday (4/14) with Liturgy bandmate Bernhard Gann. The show is free but "sold out". Other dates in the "3-month residency" have not been announced yet but presumably will be soon.