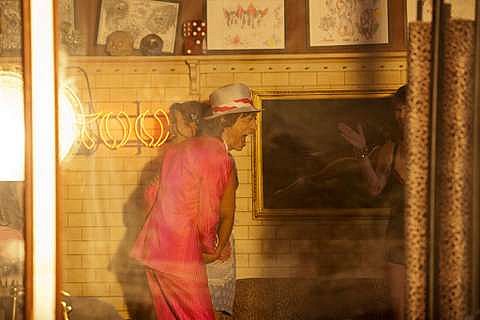 The 37th season of Saturday Night Live comes to a close next weekend (May 19) where Rolling Stones frontman Mick Jagger will pull double duty as both host and musical guest. Before you plan your bathroom breaks you might be interested to learn that Mick's backing band will include both Foo Fighters and Arcade Fire. Though we're still eight days from the live telecast, Jann Wenner has already give the SNL season finale five stars.

Meanwhile, this week's SNL has Will Ferrell and Usher.

What songs Mick will do is anyone's guess, but Will (brother of Win) Butler and other members of the Arcade Fire (as Phi Slamma Jamma) may have been getting some practice with a cover of the Stones' "The Last Time" at last weekend's Crossing Brooklyn Ferry festival.

Last year, Mick released the debut album by his new group SuperHeavy that also includes Joss Stone, Damian Marley and the Eurythmics' Dave Stewart. The video for SuperHeavy's single "Miracle Worker" is below.