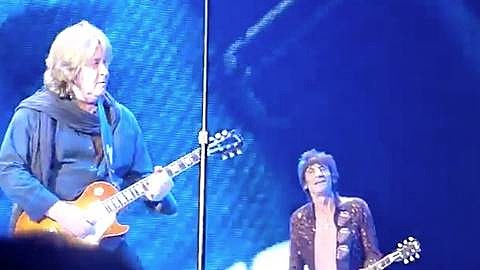 We already knew that Bruce Springsteen, The Black Keys, and Lady Gaga will be showing up at The Rolling Stones second of two Prudential Center shows (12/13 and 12/15), and we're now excited to find out that former Stones guitarist Mick Taylor, who played with the band from '69 to '74 and showed up at their London shows but not their Brooklyn show will be joining them at both Prudential Center shows. It still remains unclear if former Stone BIll Wyman ('member from 62-'93), who also showed up in London, will be at the shows, but we're keeping our fingers crossed.

The 12/13 show is still on sale but the 12/15 show is sold out, though as mentioned, it will stream live though cable, satellite, telco, and online via Yahoo! WWE.

In related news, Stones saxist Bobby Keys will be playing a Brooklyn show in between the two Prudential Center shows with his band The Suffering Bastards (which features members of Georgia Satellites, Ryan Adams and the Cardinals, Lynyrd Skynyrd & John Fogerty) at Brooklyn Bowl on Friday (12/14) with The London Souls. Tickets for that show are on sale now.

The Stones will also play the 12/12/12 Hurricane Sandy benefit concert at MSG tonight which will stream live from multiple theaters, websites, and TV channels.

A video of the Stones playing "Midnight Rambler" with Mick Taylor in London last month below...