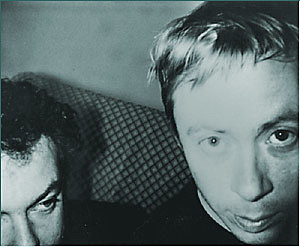 Catch Australia's Mick Turner & Jim White (2/3 of The Dirty Three) as the Tren Brothers this Saturday afternoon (today, 5/8) at Sound Fix Records. The free Brooklyn in-store kicks off at 2pm.

Catch Mick Turner & Jim White as the reunited Venom P Stinger on Wednesday May 12th at Shea Stadium in Brooklyn...

Catch Vemon P Stinger on Saturday, May 15th at the Pavement-curated ATP Festival (happening in England - the reason they got back together). Check out some videos below...