Midnight on the West Coastearlier this year (photo by Adam Murray) 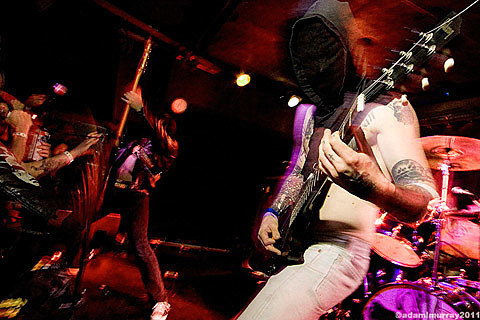 Its hard to believe that after ten years, a near infinite number of splits & EPs, and making countless waves with their proto-black-metal sleaze-n-roll, Midnight is preparing to release Satanic Royalty, their first ever LP of studio recordings. The release, due on Hell's Headbangers on November 8th, will come in CD/live DVD, LP (with bonus track), picture disc, and keepin' it uber-kvlt, cassette formats with ten new tracks of crust-ridden, whiskey-soaked darkness from this Cleveland juggernaut. Stream two songs "Necromania" and "Satanic Royalty" at the HHR site, and stream a third track "Lust Filth And Sleaze" below for the first time. Preorders will not be available, so keep your eyes peeled at the HHR site to order yours.

Midnight are on the road in the coming weeks, but no NYC date to speak of. They will, however, be at Rites of Darkness 2011 in San Antonio, TX with Inquisition and Mortuary Drape (who will be in NYC). All other tour dates and a teaser video is below.