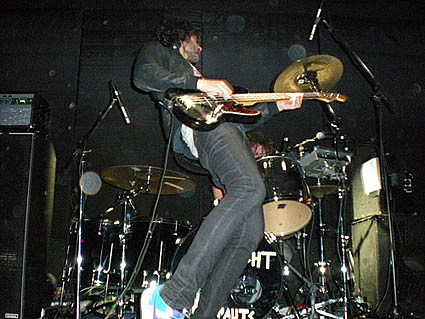 Last week in dance was pretty amazing. Wednesday night at Studio B the Shoes stole the show with their early live set - an energetic mix of lyrics and good dance beats. SebastiAn's set that followed was a bit on the weird side - it started off poppy, but quickly moved to the more electro/dance oriented. He didn't play anything super new (except his track "Motor" which is great for the floor), had a few good build-ups, but the set as a whole never really came together. After he was finished, Yuksek and Brodinski seemed to have something good going, but half of the half-full Studio B crowd left right after SebastiAn. You can only dance to Bucketheadz's "the Bomb" in the middle of an empty floor for so long before it gets awkward, so regrettably I never got to see where their set went either.

Friday night I enjoyed hearing all of the Midnight Juggernauts electronic undertones at Bowery Ballroom (which were previously drowned out when I saw them at the Terminal 5 with Justice). Despite having a much better time at this show and being able to hear more of the electronic elements of their music, the Midnight Juggernauts live show comes across much more like a rock (dare I say metal) performance than you would expect from hearing their album.

Luckily we decided to head to Le Royale afterwards where we were just in time to catch an hour of great, solidly dance-able tunes from D.I.M. He played many of his own tracks (such as "Is You" and his remix of My People by the Presets), a lot of recent releases, and quite a few remixes and original tracks by Boys Noize. Even though I found so much Boys Noize love a bit odd, it really made me think highly of D.I.M.'s set. I love Boys Noize, but have over done it with his music at this point. I've seen him deejay 5 times over the past year, and have played out Oi Oi Oi. Despite that, something about D.I.M.'s delivery of the tracks was able to make me excited to hear them again. Additionally D.I.M. has a great energy and personality that shines through while he's deejaying. He shouts along, gestures, and really gets the crowd into into it. It was a really refreshing dance experience. 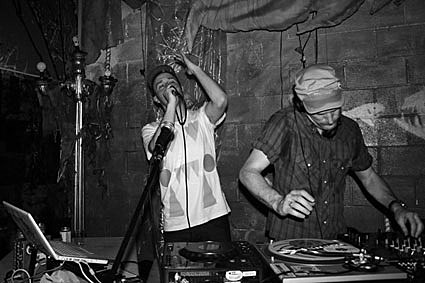 Saturday night, while I wouldn't call the steamy Glasslands Gallery refreshing, the Black Ghosts set was another breath of fresh air for dance music. Touché's UK-styled beats coupled with Simon Lord's fervent vocals reminded me of when I first started going out to see deejays. Everything sounded fresh and I would come home drenched in sweat with my feet aching, looking forward to doing it all again. That night at Glasslands I could tell I wasn't the only one who felt that way. The Ghosts had the crowd losing it on the dancefloor as they blazed through an hour and a half of great beats laced with live performances of their songs including "I Want Nothing, Any Way You Choose to Give It", "Some Way Through This", and others.

While those are some tough acts to follow, there is some great talent coming through New York this week:

It all starts tonight (Tuesday May 13) with Cut Copy, the Black Kids, and Mobius Band at Studio B. While I caught their good, but crowd-wise, relatively tame show at Mercury Lounge in March, Cut Copy apparently tore it up at Studio B:

I see no reason why tonight would be any different. Hopefully you already got a ticket because it is sold out.

Wednesday (May 14, 2008) night everyone (minus Black Kids, plus T&T) is playing again at Bowery Ballroom, and again, it is also sold out.

If you're going to miss it you can console yourself at Le Royale:

For those of you who are not quite so into Cut Copy and all that disco, MeanRed, Fun, and Love have teamed up for a new party:

What: the nastiest dance party this side of the Mississippi
Why: because thrashing disco beats were meant to be matched with hip hop sensibilities
Bring: Platinum grills, sweat towels, lycra, and shades.

There are loads of mixes available on Klever and Jokers of the Scene's myspace pages.

DJ Ayres. Check out some great mixes by DJ Ayres and the excellent History of Hip Hop series on Brooklyn Radio.

Rok One and Eamon Harkin