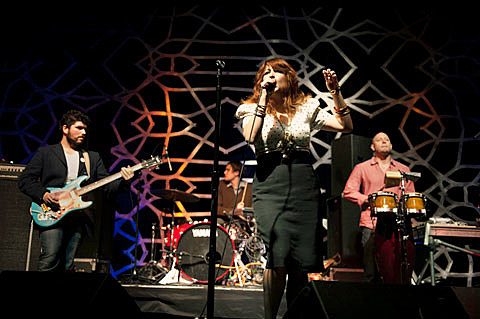 The Brooklyn Museum is back with another season of concerts in their Audiophile series. You maybe checked out Ava Luna and Lushlife a couple weeks ago (4/18). The next one happens May 16 and features electro-disco ensemble Midnight Magic and Teengirl Fantasy. In addition to the music, Nail artists Jessica Washick, Eda Levenson, and Ami Vega will also be on hand doing one-of-a-kind nail designs ($25 - $50). The concert is free with museum admission ($12 suggested donation). 7 PM.

Audiophine happens again on July 25 with BV faves Heliotropes and Japanese party band The Suzan. Speaking of, Heliotropes (who'll be at 4Knots this summer) were the musical guest on The Chris Gethard Show this week and you can watch that episode below. (FF to 23 minutes and 51 minutes for their performances.)

Brooklyn Museum is also doing a couple dance parties. On June 20, they'll have DJ collective I Love Vinyl for a celebration of the 65th anniversary of the LP. Then on August 15, it's DJ Rizzla and a live performance from Xenia Rubinos. Both these events run from 7 - 10 PM and are free with museum admission.

Video of Heliotropes on the Chris Gethard show is below.