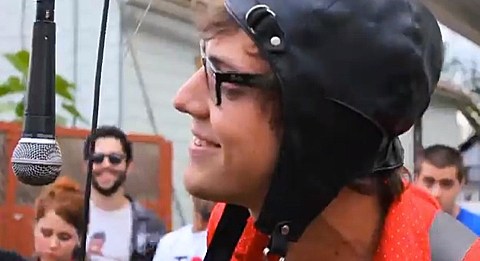 Milwaukee rockers Midnight Reruns make power pop with an edge recalling bands like The Replacements, Weezer, Superdrag, and other bands with a knack for crunchy melodicism. Their self-titled debut record is due out in November via Good Land Records (the same label that just put out Anniversary frontman Josh Berwanger's new album), and the video for one if tracks, "King of Pop," makes its premiere in this post. The song's about Paul Collins (The Nerves, The Beat) who also makes a cameo in the video, and depicts the band playing a messy backyard party, which is exactly the environment this song feels like it's made for. Check it out below.

Midnight Reruns have a few dates coming up, including a record release show in their hometown, and they'll be in NYC for CMJ when they play the Brixton Agency/MezzoForte showcase at Grand Victory (10/17) with Pity Sex, Kal Marks, Greys, Ovlov, Two Inch Astronaut, Dads and more. Doors for that show open at 3:30.

All dates are listed, along with the full lineup for that CMJ show and the new video, below...