Miguel at Made In America 2013 (more by Dana (distortion) Yavin) 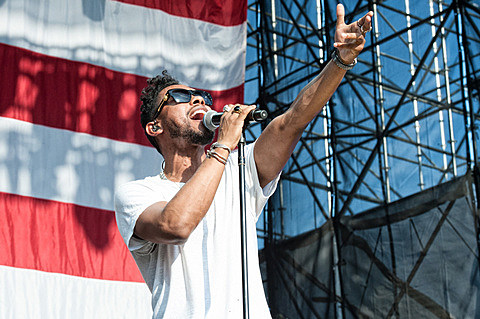 R&B crooner Miguel and guest-verse-fave 2 Chainz both have some separate dates coming up this year, but they'll join forces to celebrate DJ Prostyle's (Power 105.1) birthday in NYC on April 30 at Best Buy Theater. Tickets for this double bill go on sale Friday (4/4) at noon. Each artist's dates are listed below.

In related news, 2 Chainz has been threatened (via instagram) by an "alleged groupie" that she's suing him over comments he made about her in a now-viral video. VIBE reports:

On his recent T.R.U. Tour, a woman, who reportedly goes by the name of Tina, tried to get close to rapper Cap 1, which led to an awkward encounter between her and Chainz' entourage

"You ain't gonna catch nothing out here but a cold, baby. Put something on your back, baby," 2 Chainz joked in a viral video called #IsThisYoThot, referring to a term that stands for "that hoe over there."

In less messy news, Miguel is on the Girls Season 2 Soundtrack which is out now. You can stream his contribution, "Simplethings," along with the lists of dates, below...

2 Chainz Puts Girl On Blast (Is This Yo Thot)