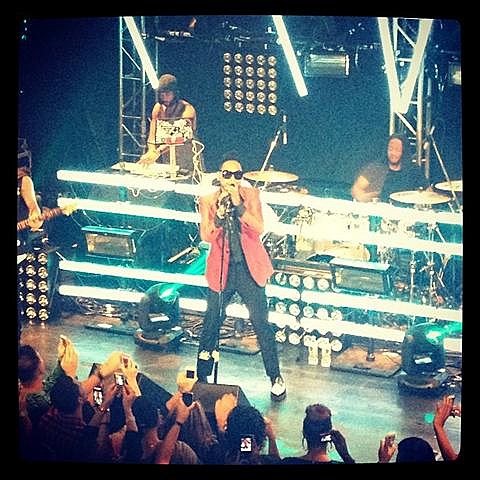 Miguel brought his tour to NYC last night (10/1) for a sold out show at Bowery Ballroom, on the eve of his album's (Kaleidoscope Dream) release. The show was packed and the crowd was into it and singing along, and seeing him last night even turned some people into huge fans. If you were there, what did you think? A video of Miguel and the rest of Bowery Ballroom singing "Vixen" during the encore is below.

The album is out now (you can stream it) and it's a pretty boundary-crossing album for major label R&B. It might not have the Stevie Wonder-esque keyboard scrawls that Frank Ocean's been employing, but like Channel Orange, it's an album for the listener, not the clubs. It plays like an album too, rather than following radio R&B's formula of putting all the focus on one or two hits, there's really no filler here (though he could do without crooning, "Tell me that the pussy is mine," which just comes off a bit tasteless).

Miguel will be sticking around NYC for a couple days before continuing his tour in LA. Tonight (10/2), he'll be hosting a Kaleidoscope Dream release party at Brooklyn Bowl with DJ sets by Samantha Ronson and Mick Boogie. Tonight's party is free. Doors are at 6 PM and the show starts at 9. Then on Wednesday (10/3), Miguel will do an in-store at Basement Mix Records (332 Crescent St.) in Brooklyn at 4 PM.

A list of all remaining dates and that video from last night's show are below.