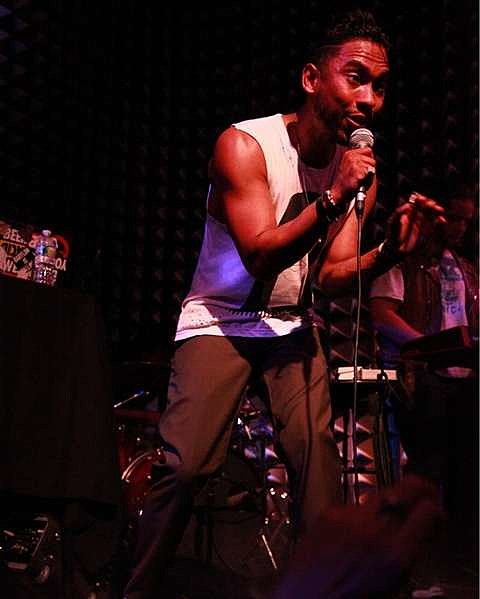 R&B singer Miguel first caught ears with his 2010 debut LP, All I Want Is You, and earlier this year he resurfaced with the Art Dealer Chic EPs. He's since announced his next full length, Kaleidoscope Dream, which he'll release on October 2 via RCA, but instead of making you wait until October, Miguel has decided to gradually unveil it. He released the Kaleidoscope Dream: Water Preview digital EP yesterday (7/31), which comprises three of the eventual album tracks, will follow that with the Kaleidoscope Dream: Air Preview digital EP on September 11, and then finally on October 2, those two EPs and five more previously unreleased songs will make up the full album. Way to utilize the internet.

You can stream the entire Water Preview EP over at SPIN and download it for just under $4 at iTunes. It's decidedly more on the Frank Ocean/Weeknd side of R&B than the Usher/R. Kelly side, and it's really good. The songs are fully formed and ready for radio/MTV/arenas but there's a depth to these arrangements that won't you normally find in those places. The end of "Don't Look Back" features a straightforward homage to The Zombies' "Time of the Season," and while Miguel's not the first R&B/hip hop artist to recognize the swag of "What's your name, who's your daddy, is he rich like me?," he certainly gives it the justice it deserves in 2012.

Miguel celebrated the new EP with a private show in NYC last night (7/31) at Joe's Pub, where he performed all three of the songs on the EP in addition to older cuts as well. He was backed by a drummer, two guys with laptops/synths and an electric guitarist. Was it a little cheesy when the mega-distorted guitarist soloed and ripped aggressive power chords over smooth R&B? Yeah, a little. And there was a bit of over-the-top heteronormativity when he demanded that the men in the audience made room for the ladies up front after playing a song where he repeated, "Tell me that pussy is mine." But overall, he and his backing band sounded great playing these songs, and Miguel has the ability to play much larger venues than Joe's Pub. Check out videos from the show below.

Miguel will play a public NYC show this Saturday (8/4) at MoMA PS1 for Warm Up with Jamie xx, Lemonade, Pearson Sound, Sinjin Hawke, and Zora Jones. Tickets for that show are still available.

The only other shows we're aware of at the moment is a show with The-Dream in Columbus, OH on Friday (8/3) and Power 98's Summerfest in Charlotte, NC. All dates in list format and the videos from last night's show are below...

Miguel - "Candle in the Sun"