Miike Snow at Terminal 5 in April (more by Joe McCabe) 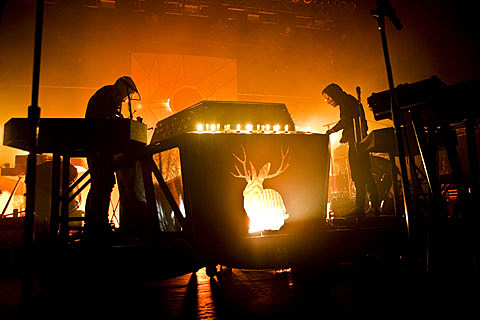 Miike Snow released their new album, Happy to You, earlier this year and have been touring in support of it, having played multiple festivals internationally, a three-night run at Terminal 5 in NYC and a more intimate show at MHOW a bit before that. The band are continuing support the album on tour and have just announced another North American leg for the fall surrounding their appearance at this year's Moogfest. That leg brings them to the NYC area for shows on October 19 at United Palace and October 23 at Wellmont Theatre. United Palace tickets and Wellmont Theatre tickets go on sale Friday (8/17) at noon with an AmEx presale starting Wednesday (8/15) at noon.

Miike Snow also play Made In America Fest in Philly next month. A list of all dates and a couple videos are below...