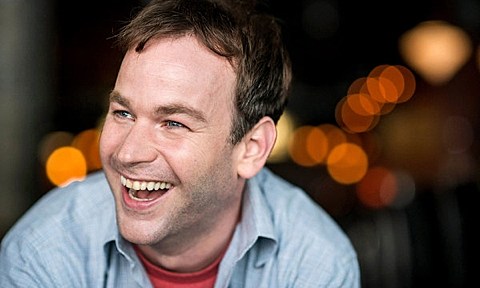 The very funny Mike Birbiglia is about to take his "Thank God for Jokes" set on tour, which doesn't include any dates in NYC, but before he leaves the Northeast area, he'll do another of his small "Working It Out" shows at Union Hall on Monday (3/3). Tickets for that show are on sale now.

All dates are listed, with a message from Birbiglia about the tour, below...

This week I returned to New York after 5 weeks on the road. Last weekend I played the Wilbur Theatre in my hometown of Boston, which was thrilling, though, for a moment, uncertain. There was a blizzard and the governor asked people to stay off of the road, except in the event of comedy emergencies. So the show went on, but we decided that anyone who couldn't get there safely could attend a make-up show in May. It was like a comedy snow day; we'll just make it up at the beginning of summer.

These days it doesn't seem like the meteorologists have any idea when it's going to snow. The forecast for last weekend was "wintry mix"- which basically means, "We don't know what's gonna happen. We know what season it is..." And they know they're going to get partial credit for the word "wintry."

Last year when I was supposed to play Worcester there was a snow emergency. "Snow emergency" is a disconcerting term. When I was a kid a snow emergency meant that my brother Joe had stuffed snow into my pants, shirt and hat and had made me into a human snowman. And then I'd cry to my mom and she would yell at Joe. But while Joe would be getting yelled at he would make me laugh and then he'd say to our mom, "If he's so upset, why is he laughing?" And it was true. I was laughing.

After Boston Joe and I flew into Minnesota and drove to Fargo. As we were driving, there were probably 6 or 7--I'm not exaggerating--6 or 7 cars and tractor trailers just in snow banks on the side of the road. And I don't think that was their final destination. They weren't like, "I think I'm gonna take an ice-cold nap here on the side of the road!" We were just like, "Wow, we gotta watch the news and find out about this when we get there!" And then we turn on the news and there's no mention of it. Apparently this is the status quo.

After Fargo we drove back to Minneapolis and settled into a hotel for a few days. Strangely, we didn't have to go outside because they have "Skyways"- which are these weird post-apocalyptic hallways that connect the buildings downtown. It's not a natural thing to have in a city. I think it means that the city is...uninhabitable. And I got lost so many times in these scary tunnels that I thought I was in an existential play. I was just like, "Wait, I was...ah, man...I'm gonna just rest here for a little bit. I guess I'll just live at this T-Mobile from now on."

But all the buildings don't build skyways, so you can't always get to where you want to go. So at one point when I was trying to get back to my hotel I just gave up and walked outdoors with no coat. It was 0 degrees. Fortunately, it was "mostly sunny." But then the wind started blowing, or as I like to call it, there were ice bullets. And then I just started jogging. And I'm jogging towards my hotel in a button-down shirt and no coat and I'm just like, "I DON'T KNOW IF I'M GONNA MAKE IT!" If I had seen a cozy snow bank I might just have plopped down and taken a nap.

But I made it. And I did some really fun shows in Minneapolis and St. Paul. And this week the tour continues on to the Westbury Music Hall in Long Island - which is the home to my in-laws live as well as Theresa Caputo, the Long Island medium, who predicted the show will go quite well.

From there I head to Philadelphia, Foxwoods, Madison, and Milwaukee. "When is my Hawaii date?" you may ask. Not scheduled just yet. Joe Bags is still working on it. Until then I'll be laughing/crying as I navigate the wintry mix.

And that concludes this week's entry in my secret public journal.

I'll see you around the building!