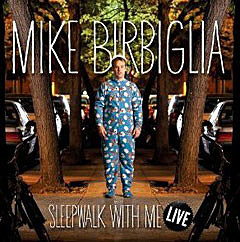 Though it doesn't say it on their website, Mike Birbiglia promises that he's performing "Sleepwalk With Me" at Comic Strip Live tonight (12/12).

UPDATE: Mike's show starts at 8:30 and tickets go on sale at noon.

I don't know what time it starts and ends, but if it's done early enough you can then head to UCB West for this week's edition of Whiplash with Leo Allen and guests.

Alternatively, you can spend your Monday night with Kurt and Kristen in Brooklyn at Littlefield. Their guests at Hot Tub this week include Michael Showalter.

Head back to UCB West on Wednesday after work for a live WFMU broadcast of "7 Second Delay" with guests Lou Reed and Suzanne Vega.

In other "live" comedy news, tickets are on sale for Star Talk Live at The Bell House on Sunday, December 18th. The lineup includdes Neil de Grasse Tyson, Eugene Mirman, and John Hodgman.

One night after that is the Hot Tub Holiday edition at Littlefield with Kurt, Kristen, Jon Glaser, Hannibal Buress, Adam the Real Man, and musical guest River City Extension.

Speaking of Hannibal Buress, he opened two shows for Aziz Ansari at the Bell House on Saturday night. We posted pictures.

Speaking of the Bell House, Rocket from the Tombs plays there tonight!