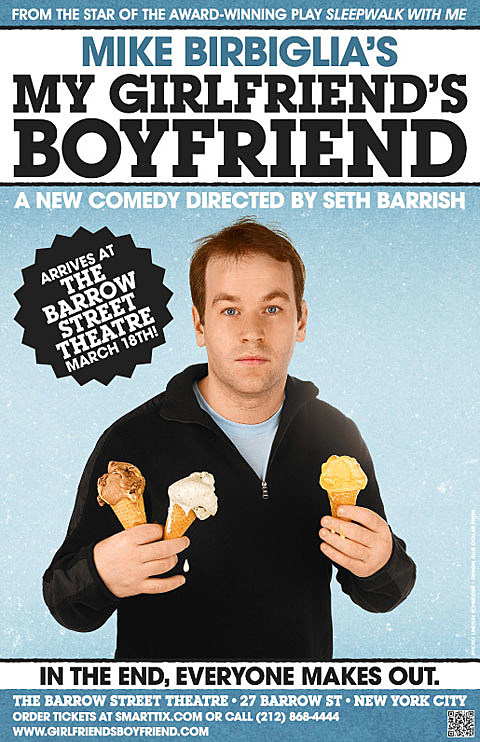 "Mike Birbiglia, a longtime favorite of mine, has evolved from a pretty standard (and prodigal) stand-up comic to an expert monologist. His epic one man show Sleepwalk With Me was my first taste of his stunning evolution. Then a few weeks ago I watched him workshop a new one man show called My Girlfriend's Boyfriend (an unfortunate title as Alyssa Milano recently starred in a movie of the same name. It probably sucked). I also just read his wonderful new book Sleepwalk with Me: and Other Painfully True Stories. He's my generation's Spalding Gray, and, man, we definitely need that." [Klaus Kinski, Nov, 19, 2010]

It looks like the days of cheap performances at places like UCB and Union Hall are once again over...

I've spent the last few months performing my all-new show, "My Girlfriend's Boyfriend," all over the planet in places like Montreal, Sydney, and San Francisco.

The reviews have been really positive. I know I shouldn't read them, but I kind of asked Google to let me know whenever someone mentions me on the Internet. That's normal, right?

The Toronto Globe & Mail writes, "Dead-on laughs and bittersweet"
The Sydney Morning Herald writes, "His compelling wit finds poetry and poignancy in awkward life events we recognize in a moment."
And The Montreal Gazette insists, "Catch it while you can!"

Now I'm bringing my show to the New York City.

Mike Birbiglia's My Girlfriend's Boyfriend arrives at the Barrow Street Theatre next month. Performances begin March 18th, and the official opening is March 31st. Tickets are going to be $49.50 starting the 31st but for the first three weeks you can get them for $35 - you can grab those at 9AM tomorrow morning through Smarttix.com.

I'm thrilled to be returning to the New York stage; this is a really intimate theater and the perfect space for it. I hope you'll come out to the show.
Hope to see you all there!

Tickets are currently on AmEx presale for performances through May 15th. General sale begins Saturday morning.