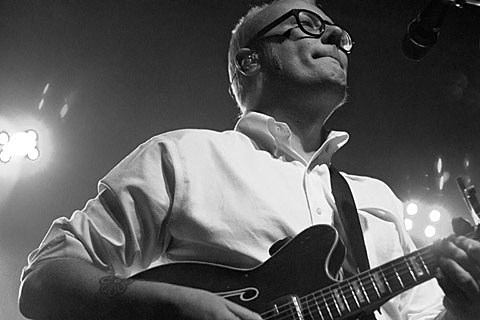 UPDATE: The January 27 performance of Revelation at the WNYC Greene Space has been re-scheduled for Thursday (1/29). Wednesday's two shows will remain as originally scheduled.

Onetime Soul Coughing frontman Mike Doughty has written a rock opera based on The Bible's Book of Revelation. He told WNYC:

It is an absolutely terrifying, monster-movie, psychedelic tale of destruction, and the language is so beautiful, it is so bizarre and wonderful. I thought, with the right music, and the right actors declaiming the text, and the right visuals, it would be a great show.

You can stream a couple songs from Revelation below. You can also go see it performed live at NYC's The Greene Space on January 27 & 28 with a full band and backup singers, including Brooklyn's Xenia Rubinos. Full cast here. The 1/27 performance will feature an after-show Q&A between Doughty and WNYC's Kurt Anderson. Tickets for both the 1/27 show and the 1/28 show are on sale now.

UPDATE: a third performance has been added. There will now be a 9:30 PM show in addition to the original 7 PM performance on January 28. Tickets for that are on sale as well.

Song streams from Revelation below...

"Cast Into the Lake of Fire" from Revelation

"Write the Things You Have Seen" from Revelation