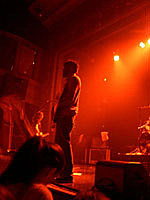 Before you read Manhattan carnivore Mike Neuman's disgruntled review of last night's Bloc Party show at Webster Hall (June 14th, 2005), keep in mind that some people do like the venue (see comments).

Photo courtesy of hseikaly who said, "imagine hot, humid, stagnant air over a large mass of people and you can't move. it was lovely."

You suck. Please stop hosting shows of good bands, because you are going to ruin their live-show reputation. Last night at Webster Hall was the last straw.

Bloc Party finally came on... and you couldn't hear anything except for drums. All I heard was drums for the first 3 songs. Webster Hall is known for it's terrible sound, but this was simply incredible. How was it that no wise-ass audience members were screaming at the sound guys and guitar techs? Oh I know why... because I think only 25% of the audience knew who the fucking band was!

Now this I can't blame on Webster Hall. The crowd was fucking terrible last night. Terrible. There was no dancing, no movement at all. The band obviously knew it, and were making comments about it throughout the show. Now I LOVE to judge people I don't know, but I usually don't do it on a public forum. Usually I just save it for my friends. But most of the kids at last night's show look like they would've been much more comfortable at a Hoobastank concert. "But why do you care what the audience is like?" Because the audience sucks, and then it affects the band, and the band doesn't play as well. It always happen. If the crowd sucks, the band is going to suck.

Ok, ok. Bloc Party certainly did not suck last night. They certainly played well, and it truly wasn't their fault that I didn't enjoy the show. It was the venue and crowd that sucked. I'm sure if last night's exact show was transported to say... Bowery Ballroom, with a different crowd, then it would've been a lot better.

Also, mark my words. One day that floor of Webster Hall is going to fucking collapse and kill a lot of people. It was like standing on a trampoline last night. That Israeli wedding-hall floor collapse video from a few years ago kept replaying in my mind during the show.

So, Webster Hall, stick with doing what you're good at. Hosting "Wet Willie" contests.

Previously
Gawker said the show full of retarded NYU kids
I was at Life of Agony while Mike was at Bloc Party (I win)
Mike told me that he saw the Cobra Snake there
Mike's right. Webster Hall might not be sturdy
Have Bloc Party jumped the shark?
Bloc Party's 2nd night @ Bowery was way better than the first
There's no place like Bloc Party @ Roxy