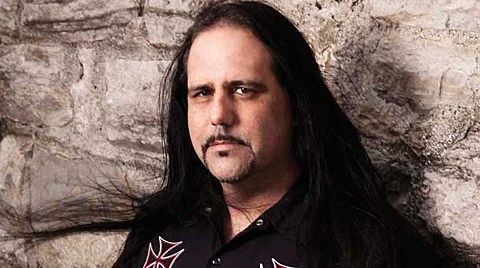 Mike Scaccia, the guitarist for Ministry and Rigor Mortis, died on Saturday night at the age of 47. Scaccia was performing onstage at the Rail Club in Fort Worth, Texas, as part of a 50th birthday celebration for Rigor Mortis singer Bruce Corbitt, when he collapsed. Shortly afterwards, he was taken to a hospital, where he was pronounced dead.
...

Scaccia was born in Babylon, New York, on July 14th, 1965, and formed thrash metallists Rigor Mortis in 1983. Six years later, the guitarist was invited by Al Jourgensen to join Ministry. The first full-length Ministry studio recording to feature Scaccia was the group's most commercially successful release, 1992's Psalm 69: The Way to Succeed and the Way to Suck Eggs, which spawned such industrial metal classics as "N.W.O." and "Jesus Built My Hotrod," and was supported by an appearance on Lollapalooza that same year.

Guitarist Mike Scaccia of Ministry, Rigor Mortis, and other bands passed away on Saturday (12/22) while performing on stage with Rigor Mortis. He reportedly asked the club to turn the strobe lights off before collapsing from a seizure.

I just lost my lil' brother and my best friend - the 13th Planet compound is devastated, completely in shock and shattered," the note reads, in part. "Mikey was not only the best guitar player in the history of music, but he was a close, close, close part of our family - and I just lost a huge chunk of my heart today. Our lives are forever changed. Life without Mikey is like orange juice without pulp - kind of bland. I have no words to express what this guy meant to me, my family, my career. . . . Everything!

Rest in peace, Mike. You'll be missed. Some videos below...