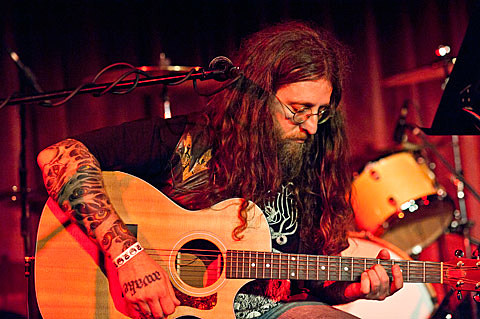 Mike Scheidt of YOB will head out on the road on a string of tour dates with Nate Hall (US Christmas), hitting the East Coast as part of a celebration of both's recent solo releases. The dates include an NYC stop on July 21st at Saint Vitus with Kevin Hufnagel, and tickets are on sale.

Both Nate Hall's solo debut and Scheidt's Stay Awake are out now via Neurot and Thrill Jockey respectively. Check out a video for "In Your Light" by the latter below.

in related news, Dysrhythmia (which features Kevin Hufnagel on guitar, along with bandmate Colin Marston) will team with The Wayward and Praetura as part of their record release show on September 22nd at Saint Vitus (tickets). The band's Profound Lore debut is due this fall.

And while on the subject, Colin and Kevin are now members of the reformed Gorguts, who play next week with Death to All at Irving Plaza.

All listed tour dates and that video are below.

Mike Scheidt - In Your Light