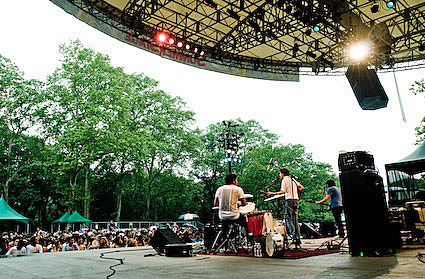 Constantines will open the Tuesday, June 30th Explosions in the Sky show at the Central Park Summerstage. Tickets for that show, which does cost money, are still on sale. More EITS dates HERE.

UPDATE: I'm told Constantines is not 100% confirmed for Summerstage.

M. Ward is playing Summerstage this summer as well. His Saturday, August 1st show is free -- and the openers are... Mike Watt and Nels Cline. It's not clear yet whether the duo will actually be playing together, separately, or as The Black Gang. As previously mentioned, "[Watt's] upcoming recording plans include...a separate project to be done with the black gang (Nels Cline from Wilco and Bob Lee), about what he calls 'my autumn.'" Last year some studio footage of Watt & Cline in the studio was posted to YouTube. You can watch that below.

Before all that, Mike Watt, with the Missingmen, has a huge tour planned for late spring. It kicks off on April 17th and runs straight through to Sasquatch Fest on May 24th, with a few days off in early May to record in Brooklyn. It's around that time that Mike appears at both Maxwell's and Mercury Lounge

Nels Cline is in NYC as we speak - continuing with a set of dates this weekend (April 10th-12th) at the Blue Note as part of the Jenny Scheinman Trio.

All Constantines tour dates and Black Gang Videos below...