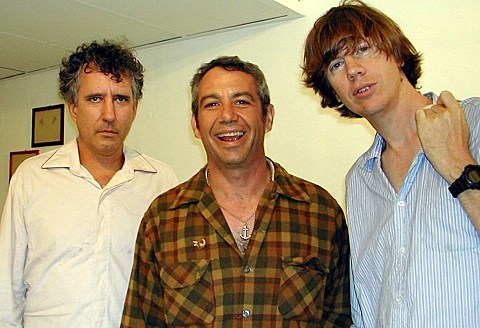 Punk veteran Mike Watt (co-founder of The Minutemen, and also of fIREHOSE, The Stooges, and more) has some shows with various projects coming up this year. First, he'll do a few dates with his band The Missingmen, including a Halloween show in LA at Olystis. Then, after a more shows with different groups throughout the year, he'll team up for another holiday show with Sonic Youth's Thurston Moore and visual artist Raymond Pettibon (brother of Greg Ginn), who designed Sonic Youth's Goo cover, a couple Minutemen covers, the Black Flag bars, and more. The trio will play John Zorn's East Village club The Stone on New Year's Eve (12/31) as a late set (10 PM), after Thurston and Zorn do an earlier duo set (8 PM). All Mike Watt dates are listed below.

For Thurston Moore, that show happens after his band Chelsea Light Moving tours with Merchandise. All of his dates are listed below too.

John Zorn also has a bunch of other upcoming dates, many of which are in NYC. Check out his full show schedule on Facebook.

All Thurston Moore and Mike Watt dates are listed, along with a video of Mike Watt, J Mascis, and Thurston Moore covering The Stooges' "Fun House" at Le Poisson Rouge in 2012, below...