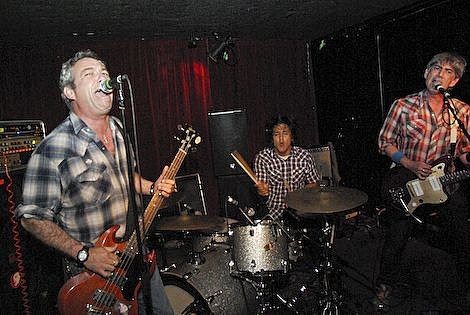 ""hyphenated-man" is the name of my third opera, "contemplating the engine room" (1997) being the first one and "the secondman's middle stand" (2004) being the second...
whereas "...engine room" dealt w/my pop's life in the navy as a metaphor for the story of the minutemen and "...middle stand" was a parallel to dante's "comedia" dealing w/an illness that almost killed me in 2000, this third opera is quite different in that it has no standard narrative (libretto!) meaning no regular beginning-middle-end and is as it were "simultaneous" in the way a mirror from just inside my head - right in this middle-age moment of mine - was then shattered into thirty pieces and then each piece stuffed in the head to show a piece of my state of mind (or out-of-mind) as of now. "thirty tunes?" yes, they're little ones... actually they're "thirty parts" of one big tune.

oh, it was kind of trippy how this piece was actually made. I wrote all thirty parts on one of d. boon's telecaster - the black one he got in kent, ohio in 1984. now I'm not a very good guitarist but tom watson was quite the righteous man in his patience and determination to take the palsy demos I gave him and bring them to the piece." - Mike Watt

Hyphenated-Man is due on March 1st, and Mike Watt has posted all the lyrics from the LP on his site if you're interested in a preview. He'll be taking out Mike Watt & The Missing Men to promote said LP, and those dates include a trip to SXSW, as well as Maxwell's on 4/3 (tickets) and Mercury Lounge on 4/4 (tickets) (both shows on sale at noon today - 1/7).

Besides the Mike Watt & The Missingmen dates, Watt will also hit the road for dates with Stooges, Hellride, Mike Watt & The Secondmen, and even play bass with Jandek in the coming months. All tour dates and some video is below.