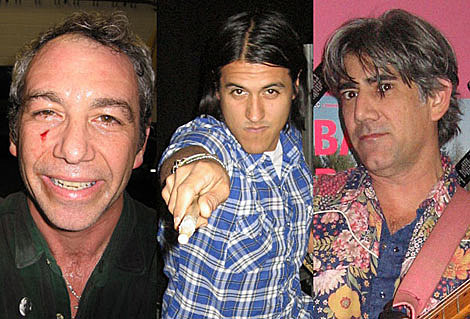 I put the missingmen together in the summer of 2006 in order to bring forth my third punk rock opera "hyphenated-man" (the first two being 1997's "contemplating the engine room" and 2004's "the secondman's middle stand"). whereas "...engine room" dealt w/my pop's life in the navy as a metaphor for the story of the minutemen and "...middle stand" was a parallel to dante's "comedia" dealing w/an illness that almost killed me in 2000, this third opera will be quite different in that it has no standard narrative (libretto!) meaning no regular beginning-middle-end and will be as it were "simultaneous" in the way a mirror from just inside my head - right in this middle-age moment of mine - was then shattered into thirtynine pieces, each showing a piece of my state of mind (or out-of-mind) as of now. "thirty tunes?" yes, they're little ones. too heavy to really hear minutemen stuff for many years, I had to face myself and get the nerve up to hear it again when I agreed to let keith scheiron and tim irwin make the "we jam econo" documentary (many thanks to them and all who helped out on that). I even did a few gigs w/george hurley w/us as a duet doing the old tunes and it was trippy for me, like I was digging on how "econo" those tiny tunes were - no filler, right to point. a big influence was those little creatures in those old hieronymus bosch painting - I read a theory about them maybe being visualizations of proverbs or aphorisms and me, not knowing much about sixteenth century dutch/flemish culture, made up my own meanings! -Mike Watt

Mike Watt (of the Minutemen) has a bunch of shows scheduled over the next few months - some with the Secondmen, and some with the Missingmen.

Dates includes May 7th at Maxwell's in Hoboken (tickets on sale now), May 8th at Mercury Lounge in NYC (tickets on sale at noon), a bunch of other headlining dates, and a bunch of shows opening for Dinosaur Jr. (J Mascis and Mike Watt together again).

There's a small gap in Mike's schedule at the beginning of May. I thought maybe new dates would show up, but according to an update I got from Mike himself after I first published this: "in the middle, may 3-4-5 has me three days in the studio w/them to record my third opera at tony maimone's studio in brooklyn (studio g)." Them = the missingmen. Also, Mike's calling the trip "'prac for the 3rd opera' tour 2009."

Having recently signed with Jagjaguwar, Dinosaur Jr will be hitting the road in April to road test new material in a town near you in cozier environs than you might expect. For the fortunate fans who score tickets to these select shows, they will also receive either a limited edition, tour-only 7" or a digital download code with the purchase of a ticket. The songs on this release were recorded live during a Pitchfork.tv feature at J Mascis' own Bisquiteen Studios.

You can watch those and other videos, and see all tour dates, below...

IN THE STUDIO Dinosaur Jr. The New Record