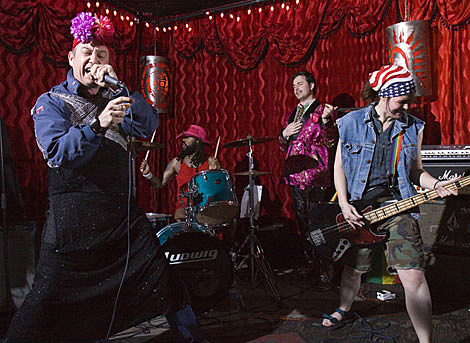 Mike Watt is a musician seemingly without ego. He'll share a stage with anyone, and does - his upcoming dates have the bassist in no less than half a dozen settings. As you can see above, Watt even sat in on guest vocals with SoCal's Black Fag ('An absolutely FABULOUS tribute to Black Flag'). The group writes...

For those who haven't heard, Black Fag has extended an open invitation to all former members of Black Flag to join us on stage for a song of their choice at any of our shows.

The only requirement: they must perform in drag!

Mike Watt was never an official member of Black Flag, but his musical history is so intertwined with Black Flag's that we consider him an honorary member, so when we found out he'd be on the bill that night we contacted him to see if he would want to be the first to accept our invitation.

See a video of Watt + Black Fag taking on "Police Story," below.

Mike Watt was recently in NYC for the "Double Nickels on the Dime" 25th Anniversary Party at the Bowery Poetry Club on Saturday, July 25th. At the variety-style show he played a selection of the band's songs on bass and did poetic reading (appropriate in light of the venue) of Minutemen lyrics. See videos of both below.

Nels is another musician who gets around quite a bit. Last night (July 30th) he was at the Stone in a trio called The BBC with Tim Berne on saxophone and Jim Black on drums (check out their initials for a clue about the name ).

"...Cline had a neat trick wherein he looped a watery guitar part through his electronic setup, and then used an octave pedal to get a distorted bass sound out of his guitar that he proceeded to play live over the loop. At other times, he went from solo line noodling to crunchy, unpredictable time-signature riffing that still kept heads bobbin'. There was flow there. Occasionally he had a scratch palette like Rage Against the Machine's Tom Morello, but instead of Bomb Squad-style guitar turntablism, it was spazzy like Christian Marclay. Meantime, Berne mostly kept to a subtle supporting role, coming out front most nakedly during the quiet interludes of the hour-long piece. Hopefully someone recorded this beast of a thing." [The Awl]

On August 4th, he'll be playing with NYC violinist Jenny Scheinman's Mischief and Mayhem, as a quartet with Jim Black (again) on drums and Matt Penman on bass. Tickets for that are still on sale.

Check out the above-mentioned Watt videos, all Watt/Cline tour dates, below...