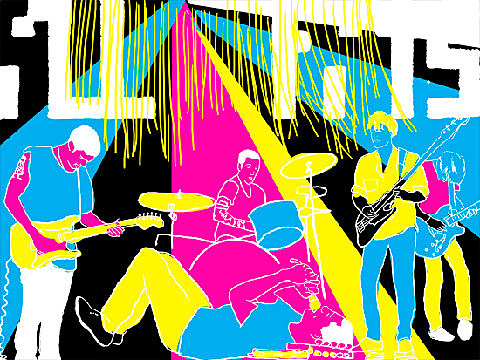 As mentioned in last week's This Week in Indie, Ill Fits, who played Cameo on Saturday (7/30), have members of MGMT and Amazing Baby. Since that show, more details on the band have emerged. The Village Voice writes of the show:

By the time Ill Fits came on, the crowd had filled out considerably; friends and scene associates were eager to catch the second show of the sorta-supergroup. (Ill fits contains members of MGMT, Amazing Baby, and Foreign Islands, and it's fronted by Miles Benjamin Anthony Robinson.) They deal in a tasteful kind of midtempo pop that has shades of new wave and a hint of Genesis. Each member of this band is a consummate professional, but they were still working out the kinks as a group, stopping and starting at a few points. Robinson was a strange mood; whether he was compelling despite or because of this, I'm not sure. He threw a few screeches into his cool intonations, banged his tambourine on the stage, spilled multiple beers, and delivered a whole song lying down, then put the whole mic in his mouth. "Are you having a good time?" he asked the audience. We replied in the affirmative. "Not as good as me!" he answered back.

Ill Fits, who also have "members of Los Caminos, Tough & Lovely, and Bygones" in addition to the bands mentioned above, have more upcoming shows including August 25 at Bruar Falls, August 27 at The Schoolhouse with Spanish Prisoners, Data Dog, Fort Lean and EULA, and Glasslands on September 10 with Mon Khmer and Young Magic. Tickets for the Glasslands show are on sale now.

Suckers don't contribute any members to Ill Fits, but they are in the same group of friends, so we might as well mention again that you can catch Suckers for free at Mercury Lounge Wednesday night.

Check out a stream of Ill Fits track "Blood & Devotion" along with all dates below...