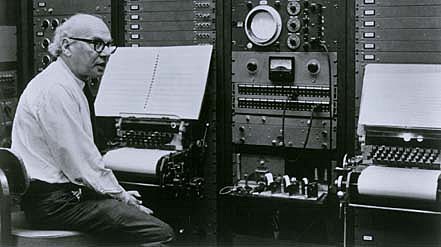 Milton Babbitt, an influential composer, theorist and teacher who wrote music that was intensely rational and for many listeners impenetrably abstruse, died on Saturday. He was 94 and lived in Princeton, N.J.

Paul Lansky, a composer who studied with Mr. Babbitt and was a colleague at Princeton University, where Mr. Babbitt remained an emeritus professor of composition, said that Mr. Babbitt died at a hospital in Princeton.

Mr. Babbitt, who had a lively sense of humor despite the reputation for severity that his music fostered, sometimes referred to himself as a maximalist to stress the musical and philosophical distance between his style and the simpler, more direct style of younger contemporaries like Philip Glass, Steve Reich and other Minimalist composers. It was an apt description. [NY Times]

The avant-garde composer was also a pioneer in electronic music. R.I.P. Milton. Some videos below...