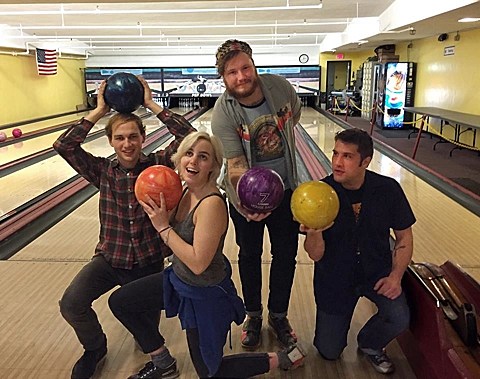 NONA were one of the more promising bands doing the whole indie rock-leaning pop punk thing, so it was kind of a bummer when they broke up shortly after the release of their debut album. The good news though, is that singer Mimi Gallagher already has a new band, Year of Glad, and today they're streaming their self-titled debut EP. She co-fronts with the band with Chris Diehm of emo revival OGs 1994!, who's also currently fronting Quit and playing guitar in Thin Lips. The lineup's filled out by Mike Harping of Good Luck and Mike Bell of Mike Bell & the Movies, who featured Mimi on a song earlier this year. If you're familiar with any or all of those bands, you pretty much know what to expect from Year of Glad. And if you're not but you like '90s indie rock and punk, this could be right up your alley. The EP comes out next week (6/9) via Lame-O Records and can be streamed below (via Stereogum).

Year of Glad's only upcoming show at the moment is in West Chester, PA on Saturday (6/6) with Marge and others. Let's hope they play NYC soon too.

In related news, now that NONA is over, drummer Pat Ware is back full time with Spraynard, whose new album Mable comes out July 10 via Jade Tree. They just dropped the new single off that, "Applebee's Bar," which you can hear below. Spraynard recently announced a tour with Jeff Rosenstock, Dan Andriano, Pet Symmetry and High Dive, though they aren't billed for the NYC show happening July 31 at the Marlin Room at Webster Hall (tickets).

However, Spraynard have some smaller headlining shows to celebrate the new album with support from Dogs On Acid (ex-Algernon Cadwallader, Snowing), and that run does include NYC. They play here on July 16 at Shea Stadium. Tickets for that one are on sale now. All dates are listed below.

& = w/ The World Is A Beautiful Place And I Am No Longer Afraid To Die, Soda Bomb
^ = w/ Dogs On Acid
* = w/ Dan Andriano in the Emergency Room, Jeff Rosenstock, Pet Symmetry