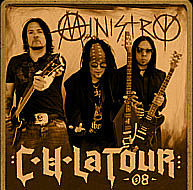 The NYC shows are May 1st & May 2nd @ Irving Plaza. General on-sale begins December 1st, but the presale starts on Thursday. Tickets are $55. More details, and all tour dates, below...

For its spectacular two-and-a-half-hour "C U LaTouR" set, Ministry will perform tracks from "The Last Sucker" as well as songs that revisit the band's rich and provocative 30-year musical history. Archival Ministry videos plus other visual elements of alchemy, Christianity, politics and other topics aligned with Ministry will be incorporated into a special video presentation, produced by Ministry music video and Wicked Lake feature film director Zach Passero that will change night to night.

As is expected from a Ministry show, you just never know what surprise guests will jump on stage for a song or two. "A Ministry tour is a traveling circus," states Jourgensen. "When we roll into town, everyone hides their daughters, but the freaks roll out the red carpet and a friend or two pops up on stage to add some spice and mayhem to the show. We never know who's gonna walk through the dressing room door at sound check. We rehearse a bunch of 'extra' songs just in case so-and-so shows up..."

{"Confirmed dates for Ministry's 2008 "C U LaTouR" are above. Additional dates and cities are yet to be announced. This page will be updated with more official tour information as things are confirmed so check back often."