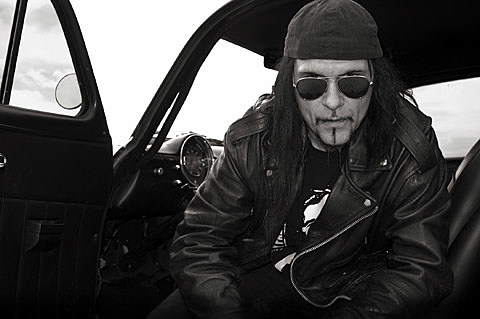 Metal Hammer: So how did the resurrection of Ministry come about?

Al Jourgensen: While I was working on [the Buck Satan record], me and Mike Scaccia from Rigor Mortis fucked around to pass the time and we had like, 5,6,7 songs and I didn't really want to do anything with them but Mikey was like, "dude these songs are awesome." They weren't country, they were more like Ministry. So he's coming by in September and Tommy Victor's coming by in October with Tony Campos and we're gona finish up and put out another Ministry album by Christmas called 'Relapse.'"

Interesting title for a record...

"Well, I'm clean living but it's like I'm relapsing back into the world of Ministry."

So what are your immediate plans for touring?

"The doctors told me to keep it light so we're doing four shows in the States next June. The Nokia theatre in LA, the Vic theatre in Chicago - we'll add second shows if those sell out - Denver at the Ogden Theatre, and one night at the Nokia theatre in New York and that's our whole American tour. That's it. And then we go to Europe and I'm gonna do a couple of festivals and club shows. We're gona do a limited tour, it'll be like 5/6 weeks. Maybe 20, 21 shows and just see how it works."

And who's in the lineup?

"It's the usual suspects, I got Mike Scaccia and Tommy Victor on guitar, I got Tony Campos on bass, and Arron Rossi who plays with Prong on drums and John Bechdel from Killing Joke."

We'll let you know when those dates materialize.