Ministry at Best Buy in June 2012 (more by Greg Cristman) 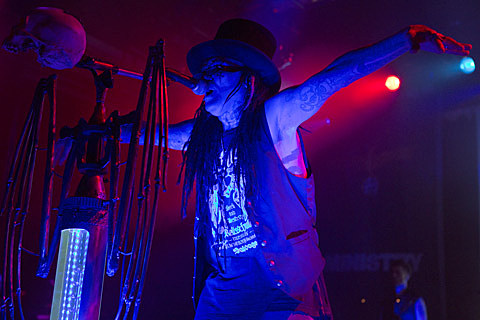 Ministry's Al Jourgensen wasn't doing so well at the band's Paris show, and spent some time in the hospital because of it:

July 27, 2012 PARIS 9:05 pm Ministry Front man Al Jourgensen collapsed on-stage during the live Ministry performance and was rushed to hospital via ambulance where he was examined by numerous physicians and diagnosed to have had a full-system collapse due to extreme dehydration and heat exhaustion intensified by the lack of ventilation on stage at the venue. Doctors confirm via blood tests conducted that Jourgensen's alcohol blood levels were well below normal and no narcotics were found in his system. As a result, Ministry has cancelled today's appearance at the L'Etaples France Rock en Stock Festival in order to allow Mr. Jourgensen a few days rest to recuperate and receive additional medical attention in Switzerland. Jourgensen fully intends to complete the remaining shows on the Ministry DeFiBriLlaTouR European leg.

Jourgensen extends his most sincere apologies to his devoted Parisian fans who displayed so much love, respect and concern for him before and after the Ministry show. Says Jourgensen: "I will make it up to you, somehow. I love Paris, I love the Parisian people. I'm so sorry ...but, shit happens and the shit hit the fan for me last night."

That's quite bold to keep on pushing on; his next show is Tuesday, July 31 in Switzerland. Take care of yourself, dude. All remaining tour dates and video from the Paris show is below.