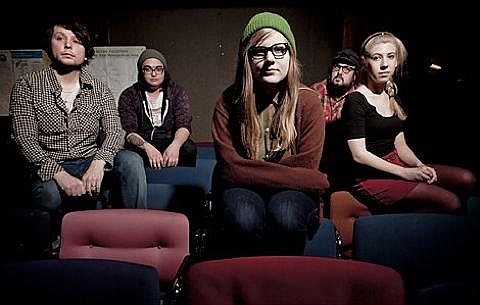 Minneapolis' Prissy Clerks formed in 2011 after Clara Salyer's old band, Total Babe, broke up. They released their debut album, Bruise or Be Bruised, late last year. Salyer is a talented songwriter with an appealingly breathy vocal style which suits Prissy Clerks' bash-it-out pop particularly well. You can stream their whole album below and we've got the premiere of the band's video for "Blast Off Girls" below too.

Prissy Clerks make their NYC live debut tonight (4/23) at Shea Stadium, playing with UK group Splashh and local duo Beverly (which features Frankie Rose on drums). They came just for this show, and it's currently their only one, so go check em out if you can. They do have a few other non-NYC shows and those are listed below.

Don't forget Splashh also play earlier tonight as part of a BrooklynVegan Presents show at Pianos that also features the NYC debut of Carmen Villian as well as Oberhofer (part of their April residency under the pseudonym "Les Yeux"). Splashh are on at 7 PM and tickets (only five bucks!) are still available. Don't miss it!

Splashh made their NYC debut last night with tourmates Generationals... who just added a show at Rock Shop tonight (tickets).

Video, stream and dates below...