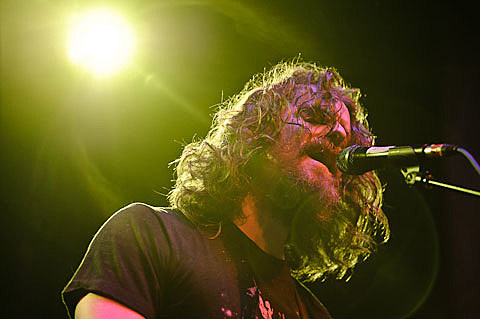 Back in the early 2000's, just before "emo" became a bad word, there was actually a bit of crossover between the emo and indie rock scenes. Some of those bands even faired well for a bit on indie rock machine Pitchfork, who awarded Cursive's Domestica an 8.0 and Minus the Bear's This Is What I Know About Being Gigantic EP an 8.6. Fans of that era are in luck, because Minus the Bear and Cursive just announced a tour together with support from Caspian, which hits the NYC area for shows on September 23 at Starland Ballroom in Sayreville, NJ and September 29 at Best Buy Theater. Tickets for both NYC area shows go on sale Friday (7/20) at noon with an AmEx presale starting Wednesday (7/18) at 10 AM. All dates are listed below.

For Minus the Bear, the tour will be in support of their new album, Infinity Overhead, which is due out August 28 via Dangerbird. It's their second album for the label, following 2010's underrated OMNI. Check out a teaser video for the album which contains a minute-long song clip below.

Caspian will also be releasing a new album this year and it will be the first album for the previously instrumental post rockers to feature vocals. The album's called Waking Season and it's due out on their new home, Triple Crown Records. It was produced by Matt Bayles, who has also worked extensively with Minus the Bear. You can watch an album trailer below.

Cursive will also be in NYC even sooner for free show at House of Vans on August 16 with Titus Andronicus, Love As Laughter, and Joyce Manor.

After the leg with Caspian, MTB and Cursive head out on a run with Girl In A Coma. A list of all dates and those videos are below...