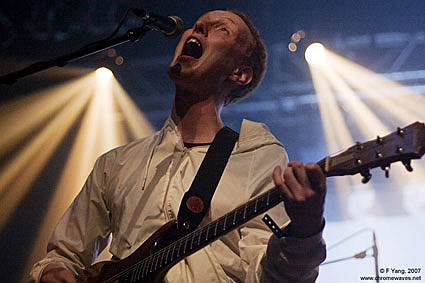 Miracle Fortress were THIIIIIIS close to winning the Polaris Prize. Graham Van Pelt's stunning release of 2007 has begun to turn people's heads to The Beach Boys and Brian Eno all over again. Playing for the hometown crowd, Miracle Fortress simply owned everyone. Having seen Miracle Fortress as a solo act first, then as a band, the project has come a long way in such a short time. Every show they play, they seem to inch closer to greatness. Also, I love watching drummer Jordon Robson-Cramer stand and drum. I'm not sure if this is for any particular reason or if it's just to look cool. Regardless, Cramer is a stellar percussionist and brings the band to a new level. [Pop Montreal 2007: Premiere Nuit]

Miracle Fortress are playing the BrooklynVegan CMJ showcase with The Rosebuds (video), Dean & Britta, The Most Serene Republic, The Shaky Hands, Bon Iver and special guest. Tickets are still on sale. MF are also playing at Sound Fix Records in Brooklyn the next day.

Graham's other band Think About Life played Pop Montreal too. All tour dates below....