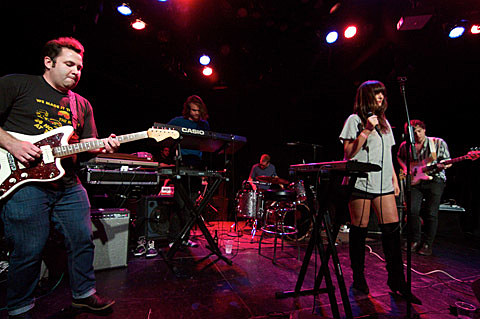 Friday (6/22) marks the first of this year's Seaport Music Festival shows down at Pier 17 with Portland's Miracle's Club. The theatrical disco revelers have just released a new compilation called Ecstacy which features "15 new tracks from our friends and collaborators across the globe." You can stream it below.

Immediately following the show there's a free after-party with Slowdance and Weeknight at Skipper's outdoor bar, which is located right next door at Pier 16.

Slowdance just released a new single, "Boyfriend," which came out via White Iris earlier this month which is an airy, danceable summmer type single if I ever heard one. I'm actually kind of partial to the b-side, "Airports," which drives along with a motorik chug and French lyrics. Both sides are streamable below. This is Slowdance's only upcoming show.

Weeknight, meanwhile, seem to have been together not very long at all. (Their Facebook page is about a month old.) The duo, who only go by their first names (Holly and Andy) make drum machine and twang lonesome West type music not that far off from more recent Raveonettes. You can stream a few tracks at the bottom of this post. Weeknight are also playing July 14 at Cameo.