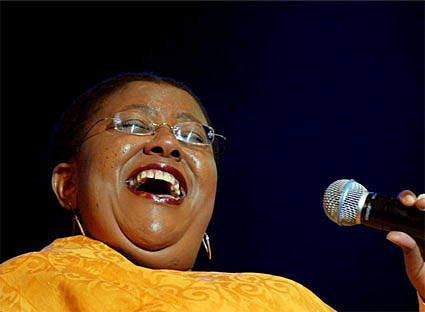 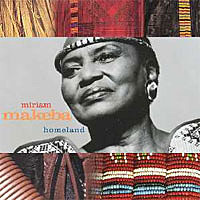 A fall sustained by Miriam Makeba late last week has forced the cancellation of her U.S. dates, including her June 14 Celebrate Brooklyn! Performing Arts Festival performance at the Prospect Park Bandshell. Although it makes her deeply sorry to disappoint her loyal fans, Ms. Makeba¹s doctors are not allowing her to travel.

Makeba¹s fellow South African and renowned vocalist Sibongile Khumalo has agreed to step in and will travel to the U.S. specifically to perform at Celebrate Brooklyn! As originally planned, Brooklyn resident and highly regarded South African bassist Bakithi Kumalo & Friends will open the show.

Sibongile Khumalo is one of Africa's biggest stars, an extraordinary performer as at home with traditional South African, jazz, and other popular styles as she is with oratorio and opera. She will perform at Celebrate Brooklyn! with a trio that will highlight her pop side. Among Khumalo¹s many accolades are the Standard Bank Young Artist Award for Music, four South African Music Awards for her light music and jazz recordings, and three FNB Vita awards for her opera and concert work. Her performance highlights include guest appearances with the former National Symphony Orchestra, the Cape Town Symphony, and the KZN Philharmonic. Sibongile has appeared with the London Philharmonic Orchestra; she was the alto soloist in The Messiah with Lord Yehudi Menuhin and the London Bach Choir under Sir David Willcocks. She was the alto soloist in the world premiere of Mzilikazi Khumalo's epic UShaka ka Senzangakhona and on it's European tour.

Other highlights include the title role in Carmen for Opera Africa; Amneris in Aida, Ulrica in Un Ballo in Maschera, for Cape Town Opera; and Azucena in Il Trovatore for Cape Town Opera and Den Norske Opera (Norway). She has also played the title role of Princess Magogo ka Dinuzulu for Opera Africa.
Sibongile has performed at Royal Albert Hall, the Royal Festival Hall, the Barbican Center, and at Ronnie Scott's in London, and at the Kennedy Center in Washington, DC, as part of the African Odyssey series.

The Brooklyn resident Bakithi Kumalo, who will open the show, is another of South Africa¹s greatest exports. His bass was the backbone of Paul Simon¹s Graceland. At Celebrate Brooklyn!, he will be joined by an all-star collection of local South African ex-pats to start the evening.

In addition to touring with Paul Simon on his current North American tour, Kumalo also recorded and toured with the likes of Gloria Estefan, Chaka Khan, Harry Belafonte, Gerald Albright, Miriam Makeba, Josh Groban and Chris Botti. Kumalo¹s albums include San' Bonan (1998), In Front of My Eyes,
(2000) and Transmigration (2006). He has also recorded three children's albums with his wife, the vocalist Robbi K.