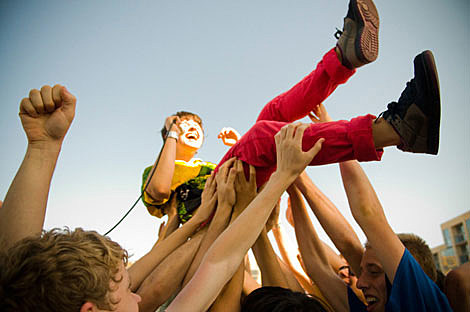 The first Jelly NYC Pool Party of 2009 went off under blue skies at the new Williamsburg Waterfront location. A more-than-6,000-strong crowd (according to the NYT) visited East River State Park for a four-band bill of Jemina Pearl, Ponytail, Fucked Up and Mission of Burma.

Baltimore's Ponytail began right at 4pm and blazed through a set of joyful, proggy pop. "Celebrate the Body Electric" came with a bout of crowdsurfing by singer Molly Siegel, who was in energetic top form.

Fucked Up's Pink Eyes was already undressing during opener "Son the Father" - before the end of the set he'd be down to just boxer briefs. The band's fans showed up to sing along and dance. Event security strained to keep the barricades - a good five-plus feet from the stage - in place despite the surging crowds. That didn't stop Pink Eyes from engaging those right up front; the singer was more than happy to pass the mic, give a high five or, in my case, grab your face and rub it in his bare chest. The band joked around on stage as they layered three-guitar riffs over the hook of "Black Albuno Bones," slow jam "No Epiphany" and the rest. The security got a shout out at the end for doing what looked like one of the day's toughest jobs.

Mission of Burma took the stage after an introduction from the requisite NYC politicians (BP Marty Markowitz even got part of his speech looped by MoB's Bob Weston) (video below). Weston manned the tape and effects from the sound booth, leaving the stage to guitarist Roger Miller, bassist Clint Conley and drummer Peter Prescott, all of whom sang at times. The guitar tone was edgy and pointed, in a good approximation of the band's recorded sound, with the bass loose and under the surface.

The sun, which set right behind the band, backlit the stage and made it tough to see at times. But also provided a perfect chance to check out the area behind the stage. That space allowed a great view of the band and a closer look at the waterfront itself. A roar let loose when the crowd recognized the opening notes of "That's When I Reach For My Revolver." The band closed with "This Is Not a Photograph" and left with a wave of applause and looping static.

In the back of the park, Pool Party staple dodgeball was happening next to a 3-on-3 basketball game. The segregated beer area, a fenced in section along the left side of park, was one change mandated at the new space. For one, it made the area right in front of the stage less congested - not totally a bad thing on a sunny summer afternoon.

The next Pool Party will be on Sunday, July 19th with Magnolia Electric Co., Dirty Projectors and Crystal Antlers (who replace White Denim). 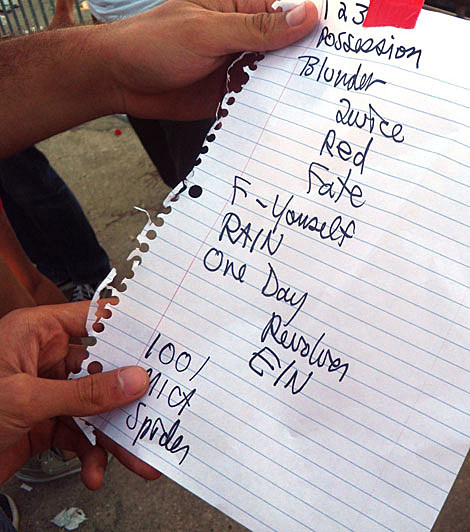